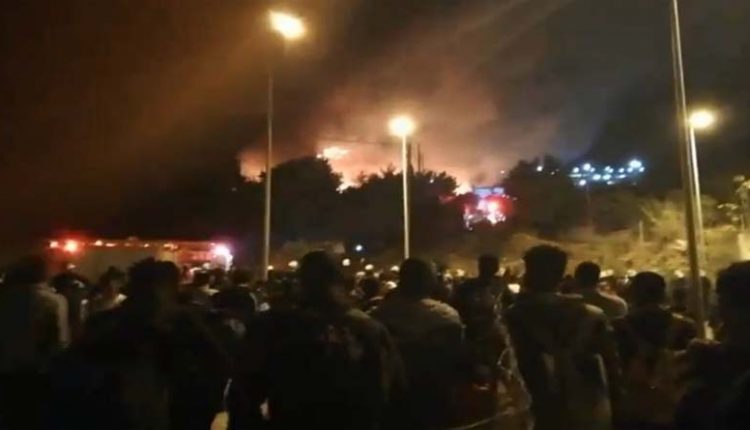 Serious clashes between Afghan migrants and Syrian refugees erupted late at night on Monday and during the early hours of Tuesday in a camp near Vathy, on the island of Samos.
A large fire also broke out in the camp where thousands of refugees and migrants are living in cramped conditions, most of them waiting for their asylum applications to be processed.
As a result of the clashes, six refugees and migrants were injured and then transported to the Samos Island Hospital, which remained on high alert in case the unrest continued throughout the night.
Three of those wounded were reported to have been stabbed and three others presented with respiratory problems, likely as a result of the thick smoke from the fire that broke out in the camp.
The fire was deliberately set, just as fights between different nationalities inside the camp were breaking out.
As a result of the fire, a large part of the Samos camp was destroyed. The Fire Brigade put out the conflagration while thousands of migrants were transferred to other open-air facilities inside and outside the town.
Local authorities warned that if winds had been stronger, the fire would have undoubtedly spread outside the camp, with unforeseen consequences for the entire island.
The local authorities on Samos held an emergency meeting at 1 o’clock in the morning to assess the situation, as things appeared quite uncertain and dangerous at the time.


As a precautionary measure, the mayor of Eastern Samos decided that a total of ten school buildings close to the migrant camp, ranging from kindergartens to high schools, would remain closed on Tuesday.
This was decided as clashes between refugees and migrants spread onto the streets surrounding the camp, possibly threatening the security of students.
Greece’s deputy Minister of Civil Protection Eleutherios Economou is expected to visit the island soon, to assess the situation and report back to national authorities in Athens so that additional security measures could be put into force on Samos.
In the meantime, the increased migrant flows from Turkey to Greece continue. On Monday, a UN report revealed the extent of the increase in migrant influx into Greece, as some 46,100 individuals have already landed on Greek shores since January of 2019.