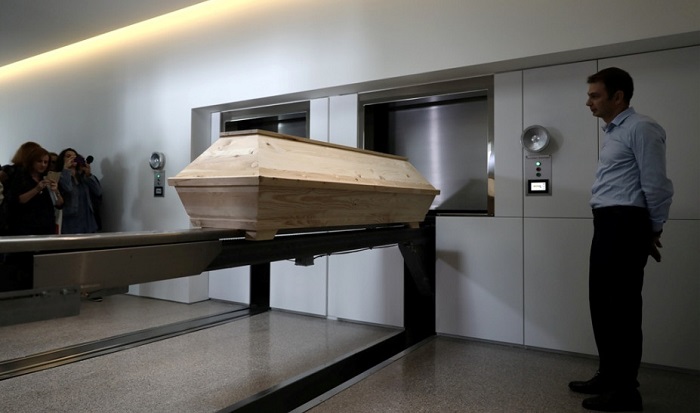 Thirteen years after the practice of cremation was legalized in Greece, the country’s first such facility has recently opened in Ritsona north of Athens, and has already carried out 15 cremations.
Built by a private company at a cost of over four million euros ($4.4 million), the crematorium was built after years of fruitless efforts by municipal authorities to create a similar facility in the cities of Athens and Thessaloniki.
Licensed in the summer of 2018 and opened on September 30, the venture is 70 percent owned by a company called “Crem Services SA.” The nongovernmental organization called the Greek Cremation Society (GCS) holds a 30 percent stake in the facility.
Speaking to the press at the facility on Thursday, GCS president Antonis Alakiotis hailed its operation as a “historic event.”
“Changing funerary customs is one of the hardest and slowest shifts that any society can make,” he said, adding, “Our country… is unfortunately the last in the European Union to acquire a crematorium.”
The practice of cremation has been legal in Greece since 2006, but it could not be carried out owing to the vehement objection of the Orthodox Church. There is a severe shortage of burial space at cemeteries across the country.
In 2012, a local Orthodox bishop blocked plans to build a crematorium in the rural town of Markopoulo outside Athens. The Church formally banned the performance of funeral rites for those who chose to be cremated in 2014.
Cremations are not arranged directly with the facility but through existing funeral homes, according to the facility’s director. “The cost at our end comes to 600 euros, but with that of the funeral home, I estimate it at between 1,500 and 2,500 euros,” Alakiotis said.