More than 200 Migrants Moved From Lesvos to Athens 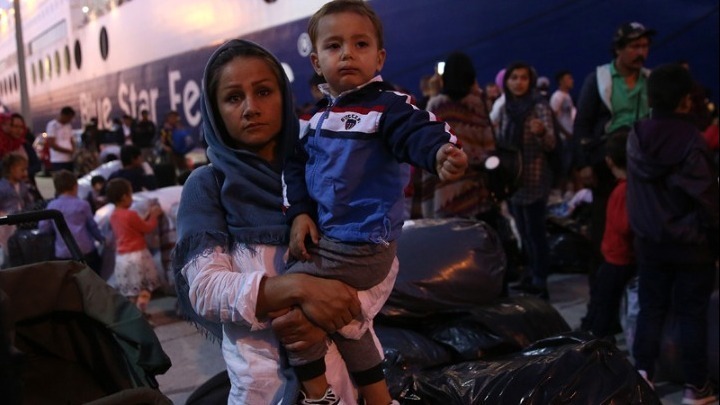 Greek authorities transferred a total of 215 migrants from the Moria refugee camp on Lesvos to the port of Piraeus early on Tuesday in a drive to reduce overcrowding at the camp, where a fire on Sunday led to the death of a woman and sparked rioting.
The migrants will be transferred by bus to accommodation facilities in Attica and the Peloponnese.
This was the third migrant transfer carried out over the past week – 350 individuals were transferred last Friday and another 110 on Wednesday, while an additional 400 people are scheduled for transfer next Sunday.
Despite these efforts, however, the influx of illegal migrants and refugees to the Greek islands remained high over the weekend, with official figures on Monday showing that from midnight on Friday until midnight on Sunday, 217 refugees and migrants landed on the shores of Lesvos.
During the same period, a total of 43 individuals landed on Chios and 114 on Samos.
On Monday, the government adopted a series of measures to ease the burden on the Eastern Aegean islands due to the increased influx of refugees and migrants who are coming to Greece through Turkey.
The measures include the transfer of a total of 40,000 refugees and immigrants either to the mainland of Greece or elsewhere.
A total of 16,000 additional refugees and migrants are expected to be transported across the country under the auspices of the Greek program ”Helios,” to specially-designed camps or hotels and motels.
The Greek government also decided to go ahead with the construction of enclosed centers for those who have entered the country illegally and are not entitled to asylum, or who have had their applications rejected.
Greece also aims to increase the repatriation of those who are not granted asylum status by 10,000 until December of 2020.
The Greek government will bring forward a bill very soon which aims to speed up procedures in order to more expeditiously determine whether migrants should be granted asylum status or if they should be deported.