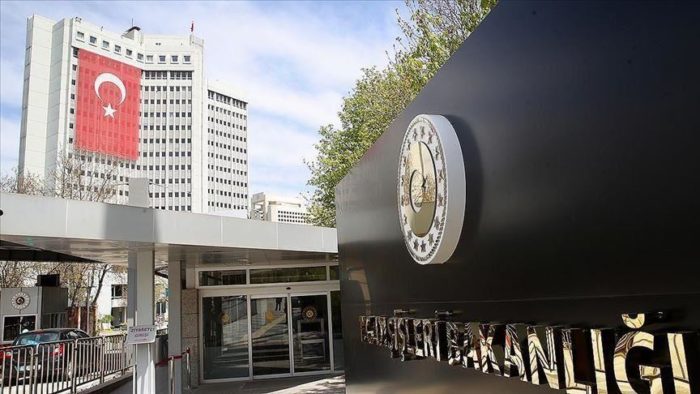 Hami Aksoy, the Spokesperson for the Turkish Ministry of Foreign Affairs, issued an angry statement against Athens and Nicosia on Saturday evening following the recent meeting held between the Foreign Ministers of Greece, Cyprus, and Egypt in New York.
The Turkish statement came as a response to the joint statement issued by the three Foreign Ministers, who condemned Turkey’s actions both inside the Exclusive Economic Zone (EEZ) of the Republic of Cyprus and in the Aegean Sea.
”We totally reject the baseless claims regarding our country in the joint statement of the trilateral meeting with the participation of Greece-Egypt-Greek Cypriot Administration,” the statement began.
Turkey then accuses Greece and the Republic of Cyprus of having ”maximalist national policies” and the statement further notes that they are both trying to ”involve the countries in the region, in addition to the EU countries.”
”Countries in the Eastern Mediterranean neither have authority nor responsibility nor a word to say concerning the Aegean problems and the Cyprus issue,” the Turkish statement noted.
Aksoy specifically accused Greece of being ”insincere.”
”It is also insincere on the part of Greece to make baseless claims against Turkey at a time she extends cooperation messages to us,” the statement said.
Aksoy concluded his attack on Athens, Nicosia, and Cairo by saying that Turkey will continue to resolutely defend both its own and Turkish Cypriots’ rights in the Eastern Mediterranean, noting that ”projects which do not include Turkey and the Turkish Cypriots in this region will never be efficient and effective.”
It is noted that on October 8, 2019, Cairo will host the next trilateral summit between Greece, Cyprus, and Egypt, with the participation of the leaders of the three countries.
New series of NAVTEXes
At the same time, Turkey issued a series of new Navigational Telexes (NAVTEX), with which it blocks off large sea areas near both Cyprus and the Greek islands of Limnos and Lesvos.
Four of the five NAVTEXes relate to areas around Cyprus, on which Turkey is focused, while one is between Limnos and Lesvos.
The military exercises Turkey intends to conduct in these areas will last throughout the month of October.
Greek Response
Commenting on these developments, George Gerapetritis, Greece’s Minister of State, said that ”there will be no concession on principal issues of our national policy in both Cyprus and the Aegean.”
“The Turkish government seems to use Greek-Turkish bilateral relations to gain diplomatic support in Europe for the demands it currently has,” Gerapetritis noted, speaking with SKAI TV on Sunday morning.