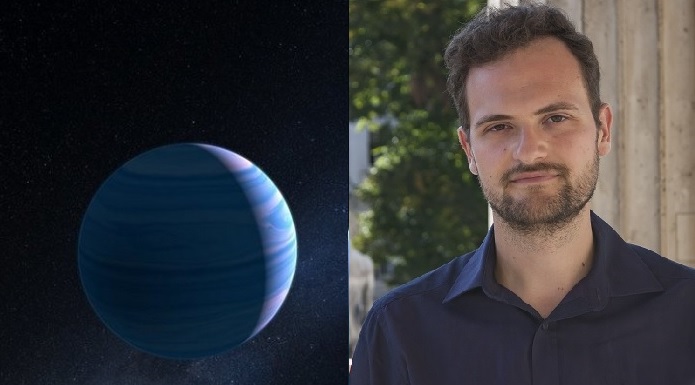 K2 18b is the only exoplanet beyond our solar system known to have water vapor and temperatures that may be able to support life.

This little-known planet is about 110 light-years away from our solar system, according to a recently released study by Greek astronomer Angelos Tsiaras.

The young Greek astronomer is a research associate at the Center for Space Exochemisty Data at the University College London (UCL) who was born and raised in northern Greece, in the city of Drama.

Five years ago, after completing his undergraduate studies in Physics at the Aristotle University of Thessaloniki, he went to the UK for his postgraduate education at UCL.

His parents and brother still live in Drama and he is hoping to be able to return to Greece at some point to start an academic career as a professor at a Greek university.

Astronomer Tsiaras spoke to the Greek Reporter about the significance of the recent find.

“Amongst the 4,000 exoplanets that we know right now, there are only a few that have a temperature similar to earth and might be able to support oceans. This does not mean that all these exoplanets have water. This is the first one that we have actually found that has water. So, the combination between atmosphere, water vapor and the correct temperature, make this planet the best planet that we now have for habitability,” he explains.

Of course, all planets that have the correct temperature are considered potentially habitable, because we cannot exclude it nor can we confirm it. Among all these planets, this one [K2-18 b] is the best candidate because it has more chances to be habitable. We still have a long way to confirm that a planet is indeed habitable.”

What’s next in your research regarding the exoplanet K2-18b?

“Unfortunately, current instruments cannot give us more information about this planet. We are waiting for the next generation of space telescopes that will provide us with information about other molecules in the atmosphere of the planet.”

When will the next generation of telescopes be available?

“The next big space telescope will fly in 2021. It’s not that far away. So, we’re talking about five to ten years; but until then, we can continue looking for other similar planets. We can continue working on identifying good targets, good candidates. Maybe targets that also have water and habitable temperatures.

The telescope that was used to obtain the current observation was the Hubble Space Telescope which is orbiting around the Earth right now as we speak. The next one, the James Webb Space Telescope, will orbit the sun. It will be further away from Earth so it will be less influenced by Earth and will be able to give us better observations — and of course it will be much bigger.”

When did this research begin?

“The study of exoplanet atmospheres started more than ten years ago with the objective to be able to characterize exoplanets, not only find them. The first evidence for water vapor on an exoplanet was found about ten years ago, but that was only a gaseous exoplanet. The K2-18b is potentially a rocky one, it may have a surface.

We have two targets: one target is to be able to identify habitable worlds and the other is to try and observe as many planets as possible. These two things together will bring us closer to the answer of a very fundamental question, which is whether Earth is the “unique planet” in the universe that can support us, or are there other planets similar to Earth or with similar conditions where life, as we know it, could survive.

We would like to answer this question, and through answering this question we will learn more about our origins, how we ended up being on this planet and how common life is in the universe.”

What more can you tell us about your research?

“We should be ready for many new discoveries in the next ten to fifteen years in the field of exoplanets, because right now we don’t know very much. The planets we have already found are really surprising. We have found many planets and they are very different from the planets of our solar system and there are so many different solar systems out there. We haven’t found any solar system that looks like ours.

Every time that we find something new, questions arise and for sure the more planets we look for, the more we understand that Earth is a very, very special planet and we should take care of it more.

We are looking for habitable conditions so that we can learn. We are curious to find out if there are other forms of life out there.”