PAOK, AEK Knocked Out of Europa League Despite Wins (video) 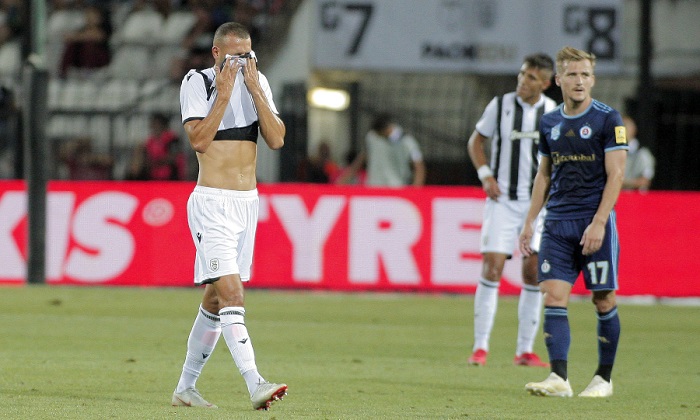 The remaining two Greek representatives in the Europa League, PAOK and AEK, were dumped out of the competition despite wins on Thursday.
Reigning champions PAOK were knocked out by Slovan Bratislava despite a thrilling 3-2 home win in the second leg of their Europa League play-off tie, with the Slovaks going through on away goals after the scores finished 3-3 on aggregate.
There had been hopes of an astonishing comeback for PAOK when two goals goals from Dimitris Limnios and Karol Swiderski within two minutes at the start of the second half put PAOK 2-1 ahead, with the hosts needing just one more goal to progress.
But De Marco’s strike a minute after the hour mark seemed to extinguish those hopes, before Dimitris Giannoulis then set up a breathless finish by scoring a superb long range effort to make it 3-2 to PAOK on the night.


AEK crashed out of Europe despite producing a much-improved display to defeat Trabzonspor 2-0 in Turkey, with the home side going through on away goals after the tie ended 3-3 on aggregate.
Marko Livaja’s strike and a Petros Mantalos penalty put crisis-hit AEK, who sacked coach Miguel Cardoso just six days ago, to within one goal of overturning the deficit and completing a remarkable comeback.
Stand-in boss Nikos Kostenoglou clearly managed to rally the squad for a brilliant performance, but it was just short of pulling off the minor miracle required, and Tranbzonspor will take their place in the group stage at AEK’s expense.