Greek Authorities To Determine Cause of Deadly Helicopter Crash in Poros 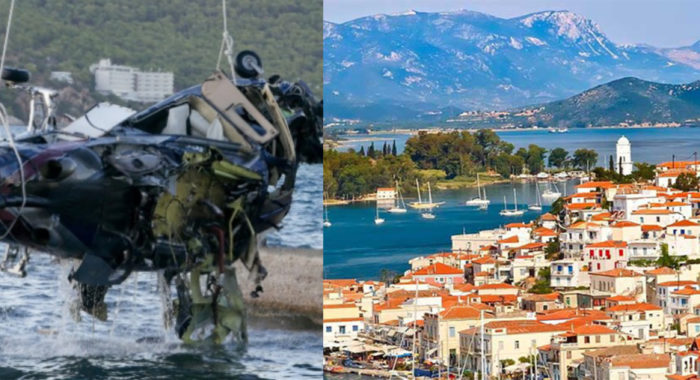 The Greek Air Accidents Investigation Committee began an investigation on Wednesday to determine the reasons behind the helicopter crash which took place on Tuesday off the coast of the picturesque island of Poros in the northeastern Peloponnese.
Despite it being far too too soon to determine the exact causes for the fatal accident, Greek media are reporting that the Committee has already managed to verify that there was a mechanical problem with the helicopter.
Of course nothing is certain at this early juncture, but according at this initial stage of the investigation, it seems that the helicopter showed signs of some sort of mechanical malfunction as soon as it took off from Poros.
According to media speculation, the then resulted in the helicopter touching electric power lines above the sea which separates Poros Island from the coast of the Peloponnesian Peninsula. This subsequently led to an explosion, and the completely disabled helicopter then fell into the sea.
When the investigation is completed, the findings are expected to be handed over to Greece’s Civil Aviation Authority for further research.
The helicopter crash resulted to the tragic death of all three individuals who were on board.
Greek and Russian media have begun to bring to light details about the unfortunate victims of the helicopter accident.
The Greek pilot
Nikos Karystinos, an experienced pilot, a former member of Greece’s Air Force and a graduate of the Hellenic Air Force Academy, also called the “School of Icarus,” was the first victim of the crash.
A father of three, Karystinos had more than seven thousand hours of flying time when he took off for the last time, heading from Poros toward the international airport in Athens.
The two Russian passengers
The two Russian passengers, Mikhail Abramov and Davel Akolinin, had hired the helicopter to fly them from the small island to the international airport in Athens.
Very little information has become public regarding particulars on the life of Davel Akolinin. However, the death of his fellow passenger Abramov has received a great deal of attention in Russian media, since he was a prominent member of Russian society.
A prominent employee of one of Russia’s largest insurance companies, as well as a great philanthropist and the creator of a private museum housing hundreds of priceless Byzantine and other Christian icons, Abramov was one of the modern figures that Russia felt it could be proud of.
Alexei Lidov, the chief of Russia’s scientific center for Eastern Christian Civilization, announced Abramov’s death in a post on Facebook.
Abramov’s museum, called The Museum of Russian Icons, opened its doors in 2006. It displays more than 4,000 artifacts, among which are at least 600 important Christian icons.