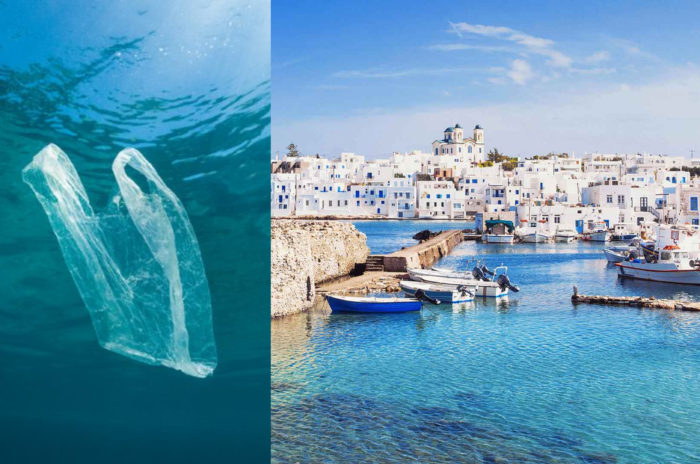 The popular Greek island of Paros is on a mission to become the first plastic waste-free island in the Mediterranean, using guidelines from the program called “Clean Blue Alliance.” This project is an initiative of “Common Seas,” an organization which seeks to reduce plastic waste and plastics pollution in the seas.
The Common Seas initiative provides crucial support to islands in accelerating their source-to-sea solutions, with the ultimate aim of completely eliminating plastics from the island environment.
The project is evidence-based and solutions-oriented, as it seeks to identify and support local enterprises which reduce and reuse plastics.
This innovative initiative is a collaboration between ground-breaking local businesses on Paros, World Wildlife Fund Greece and the Cyclades Preservation Fund.
Clean Blue Paros is tasked with giving information to the residents of Paros and the island’s visitors in order to enhance their understanding of the ecosystem. The organization is also on a quest to identify and invest in solutions which will have the largest impact in reducing the plastic items most commonly found in the waters around Paros.
It is hoped that they will all contribute together to a lasting reduction of plastic waste found on, and in the waters around, the island in the future.
Paros’ mayor Markos Koveos told Greece’s state-run AMNA news agency that the first step will be to phase out plastic straws by next summer, ahead of the EU ban planned for the year 2022.
“We are encouraged by the businesses who have already committed to support ‘Clean Blue Paros.’ They are already acting to reduce plastic-use and better manage plastic waste, by offering incentives for customers using refillable cups and providing alternatives to plastic straws,” the mayor stated.
“We will continue to support the growth of conservation and ecological awareness on Paros”, Koveos added.
The agreement reached by the partners on Paros also constitutes a significant move toward the adoption of the EU’s strategy for ”Plastics in a Circular Economy.” One of the stated aims for this plan is to ”protect the public and the environment from plastic pollution whilst fostering growth and innovation.”
The Clean Blue Paros initiative intends to collaborate closely with the municipality of Paros  and the island’s residents and visitors to create a more ecologically sustainable economy which will make Paros a world leader in plastic-waste free living.
With their methodology encompassed in the phrase ”Investigate, Intervene, Influence,” Clean Blue Paros is currently carrying out research to understand Paros’ plastic ecosystem in order to identify the ways in which plastics could be prevented from entering its waters.
This summer, they will support the local community with the development of anti-plastic initiatives which they believe will have long-term effects.
Together with local experts, the project has already developed guidelines and created a dynamic toolkit to support a plastic-waste free island — which the organizers hope will also attract environmentally-aware tourists and investors.
These sustainable proposals and measures can also be adopted on both national and international levels, and inspire similar efforts on other islands and in other countries across the globe, according to members of the initiative.
Source: AMNA