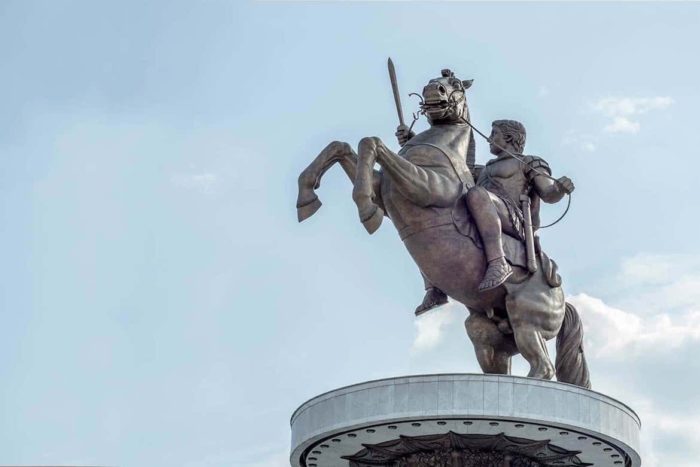 Authorities in North Macedonia on Friday erected a sign at the base of the massive statue of Alexander the Great in the center of Skopje, admitting that the conqueror ”belonged to ancient Hellenic history and civilization.”
The event was publicized by Nikos Kotzias, Greece’s former Foreign Minister and the co-creator of the controversial Prespa Agreement.
Kotzias noted in his tweet that ”this is an action of friendship between peoples, which hits (at) irredentism.”
”This is an answer to all those who were swearing at me,” the foreign minister concluded in his tweet.
Part of the grotesque, nationalistic ”Skopje 2014” project put forth by the former right-wing leadership of North Macedonia, the massive statue of Alexander the Great was constructed as a way to provoke Greece by claiming a vital part of the country’s history.
The project, which was forced through in one of the poorest nations of Europe, cost hundreds of millions of euros.
However, under the provisions of the Prespa Agreement, North Macedonia is obliged to highlight on every possible occasion that their nation has no relation to the history and civilization of ancient Greece. Alexander the Great, his father Philip of Macedonia, and the ancient Macedonian Kingdom were indelible parts of that civilization.