US Kicks Turkey Out of F-35 Fighter Jet Program

The United States declared on Wednesday that it was removing Turkey from the F-35 fighter jet program, after Ankara began accepting delivery of the Russian S-400 missiles last week.

“Turkey will certainly and regrettably lose jobs and future economic opportunities from this decision,” Lord said. “It will no longer receive more than nine billion dollars in projected work share related to the F-35 over the life of the program,” the Undersecretary added.

Earlier on Wednesday, the White House said in a statement that Turkey’s decision to buy the Russian S-400 air defense system “renders its continued involvement with the F-35 impossible.”

“The F-35 cannot coexist with a Russian intelligence-collection platform that will be used to learn about its advanced capabilities,” the White House statement said, referring to the S-400 air defense system as a means for Russia to probe US capabilities. 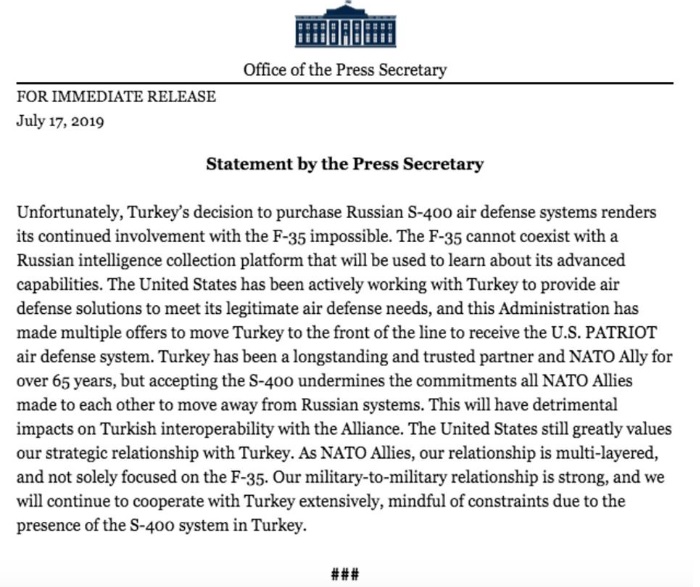 The Turkish Foreign Ministry said the move was unfair and could affect relations between the two countries.

“We invite the United States to return from this mistake which would open irreparable wounds in strategic relations,” the ministry said after the Pentagon’s announcement.

US President Donald Trump announced on Tuesday that the S-400 purchase means Turkey will not be allowed to buy any F-35 planes.

But he also declined to criticize Turkey’s acquisition of the Russian defense system, stating that “it’s a complex situation,” and that Ankara was forced into the move by his predecessor, Barack Obama.