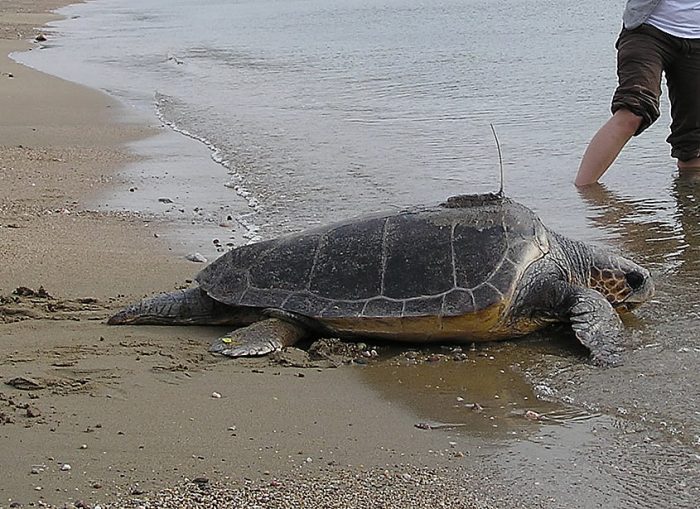 The Archelon group, the Sea Turtle Protection Society of Greece, has recently launched an innovative way to protect the endangered sea turtles in Greece by using satellite tags.
On the 1st of June this year, satellite tags were placed on 12 loggerhead turtles in order to track their movements at sea during and after each nesting effort is completed for the season.
The data provided by the satellite tags is also expected to provide insight about their migration towards foraging and overwintering habitats.
This will help with the reduction of negative interaction with fisheries and will help create better management strategies for their conservation.
How does the satellite tag work? When nesting is completed, a small sized transmitter is attached on the top of the sea turtle by trained scientists. The transmitter sends a signal to an Argos satellite when the sea turtle surfaces for breath or comes out of the water completely, and this is how researchers can track the turtle’s movements.
This project which is funded by MAVA Foundation, was created in mid June 2018, at Kyparissia Bay, located in the western Peloponnese.  It started with 9 loggerhead turtles so that their movements could be tracked at sea. 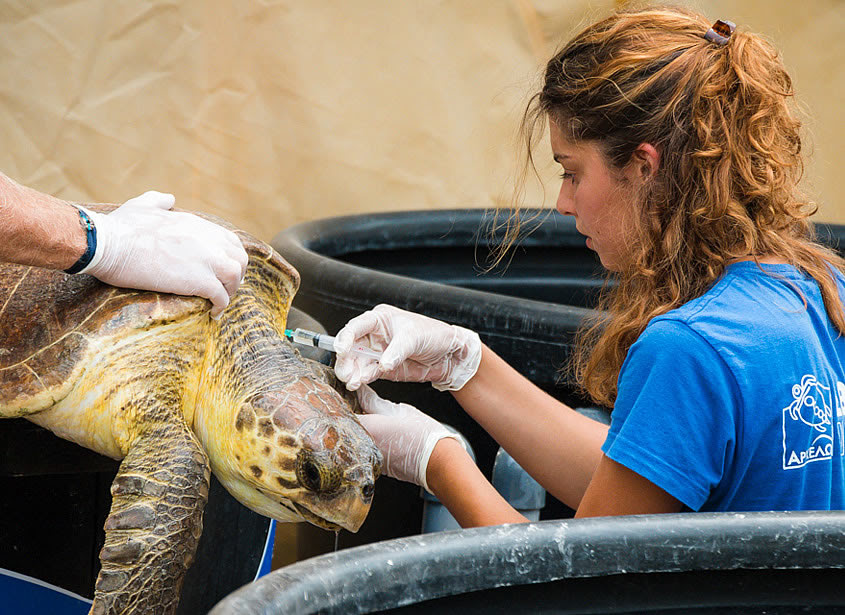 Archelon, was established in 1983 to combat the threats posed to sea turtles from human activity, such as plastic and other marine waste, ocean pollution, global warming, speed boats and entanglement in fishing gear.
One of its main priorities is the protection of the loggerhead (Caretta caretta) who is an emblematic species of the Ionian and Aegean seas, nesting on Greece’s sandy beaches and who is under threat from tourism development.
Back in 1977, two Greeks, Dimitris and Anna Margaritoulis discovered a big number of loggerheads nested on Zakynthos island. Until that time, the scientific community did not know that the loggerhead sea turtles had chosen their nesting grounds there.
This is when the story of the Archelon group began, which over the years has been monitoring the population of sea turtles, raising public awareness in Zakynthos and elsewhere, and implements management and protection measures.
It also operates a Rescue Center for the sick and injured sea turtles in Glyfada, near Athens, where over 50 injured and sick sea turtles are treated including the loggerhead, leatherback, and green sea turtles.
The group works with local authorities, institutions, fishermen and state agencies, to restore and manage the sea turtle’s environment.
It heavily relies on volunteers. Each year more than 500 volunteers from around the world join the operations in the Rescue Center and the projects dealing with the conservation of nesting beaches.
Every summer, the team of volunteers monitors about 75 km of the major nesting beaches on a daily basis in Zakynthos, the Peloponnese and Crete, where they have three permanent and 10 seasonal information stations. Every year more than 2,500 nests are protected against predation, human threats, and sea torrents.
More that 100,000 tourists contact Archelon annually to find out more about its diverse programs and more than 12,000 people take part in their educational programs, according to their website.
For more information here