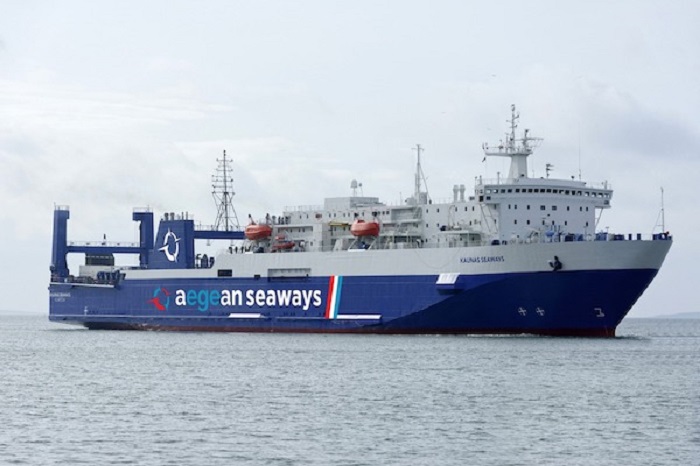 Ferry services between Smyrna’s (Izmir) Cesme district and the Lavrio port, near Athens began Sunday with a special ceremony at the Turkish Port.
It is the first time that the Turkish and Greek mainlands will be connected by ferry, something that is expected to boost regional tourism.
The journey aboard the “Kaunas” ferry takes about 7 hours. The ship departs on Monday, Wednesday and Friday from Lavrio, and from Cesme on Tuesday, Thursday and Saturday. Prices for a one way ticket start at 55 euros.
Bureaucratic obstacles had delayed the start of the service which was initially scheduled for June 2nd.

Bülent Ipek, Board Chairman of the Istanbul-based company Aegean Seaways, was quoted by the Daily Sabah as saying that the ferry line has the potential to develop commercial and social relations between the two countries.
It will not only provide easier transportation for individuals, but also for cargo-carrying vehicles, Ipek said. He added that the ferry will reduce costs for companies which transport products via semi trucks because, it will provide an easy route for the big rigs to get to Europe via Izmir.
“The line will not only boost the region’s economy but it will also provide significant convenience for expatriates as well as tourists,” Ipek furthermore added.
The Cesme to Lavrio sea route was chosen as it is the closest distance between the Turkish and Greek mainlands.