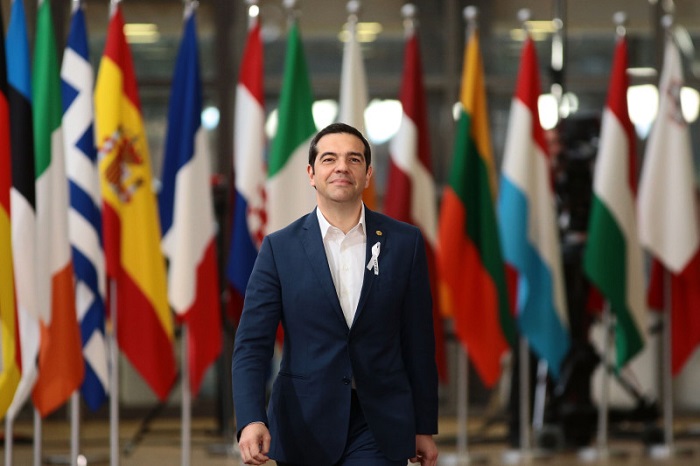 Greek Prime Minister Alexis Tsipras is slated to give out one billion euros in various types of handouts as the crucial European and local elections loom ahead, a move which has alarmed the country’s creditors.
European Stability Mechanism President Klaus Regling stated on Thursday that he is “worried” about the handouts, which include relief measures to 2.5 million pensioners, as well as rent subsidies and bonuses to large families.
Along with the above measures, the Greek government also announced a reduction in value added tax in supermarket goods and restaurant meals, and a restructuring of debts owed to the tax office and security funds in 120 installments.
The prime minister announced these measures one week ago, just after the release of photographs showing him vacationing on the luxurious yacht belonging to a shipping magnate in August of 2018.
Tsipras’ clandestine vacation was widely ridiculed on social media, since the leftist prime minister has often declared that his party is for the people, and against the elite and the oligarchs who have corrupted the Greek governments of the past forty years.
The opposition also attacked the prime minister for not practicing what he preaches and the fact that he had kept the vacation secret. Additionally, when the photographs leaked to the press, a government spokesperson said that the whole story was fake news.
This was before the wife of the yacht owner came forward and admitted that she hosted the Tsipras family for a week on the boat because “the prime minister was tired and in need of rest.”
The issue affected Tsipras’ already sagging ratings in polls, and he rushed to announce the relief measures immediately afterward. In fact, Tsipras postponed some scheduled pre-election appearances in Epirus and flew to Athens to announce the relief measures with much aplomb.
Opposition parties slammed Tsipras’ move, accusing him of trying to buy citizens’ votes. Main opposition New Democracy Party chief Kyriakos Mitsotakis said that the government had been planning the 120-installment debt payback plan for two years now and they brought it before Parliament one week before the elections.
Mitsotakis also called the Syriza administration as “a government in a state of panic.”
Nevertheless, opposition parties voted in favor of all government-sponsored measures on Wednesday, arguing that regardless of the suspicious timing of the handouts — as they are calling them — crisis-stricken Greeks need every penny they can get from a government which has overtaxed them in the past four years.
Tsipras retorted, saying now that Greece is out of the bailout programs and its fiscal targets are met, the government is free to proceed with its social policies. He also hinted of further relief measures in the next months.
Finance Minister Euclid Tsakalotos argued in the House that since the government has achieved a primary surplus over that which lenders require, it has the liberty to share the surplus with pensioners and low income families. At the same time, they believe they can and should reduce the VAT in foods and restaurants from 24 percent to 13 percent.
Meanwhile, Bank of Greece Governor Yiannis Stournaras warned the government that the relief measures may affect the 2019 primary surplus target. He also said that there is no  fiscal room for additional such measures this year.
Stournaras argues that given the first quarter figures for 2019, it is possible that this year’s target of 3.5 percent of GDP primary surplus may be jeopardized by untrammeled spending.
Brussels worried
The eurozone also shares the concern of the Bank of Greece governor. Speaking after a meeting of eurozone finance ministers, European Stability Mechanism President Klaus Regling told a news conference on Thursday that the ESM was “worried” about the measures, noting that spreads had risen by 50 basis points.
“Our preliminary assessment indicates that with these measures, the primary surplus target of 3.5 percent this year might not be reached by a significant margin and that would be even more so next year,” he warned.
Regling also added that the particular measures “are not growth friendly in the medium and longer term.”
European Commissioner for Economic and Financial Affairs Pierre Moscovici warned that the measures announced by the government could significantly impact fiscal targets, which would have repercussions on existing agreements. He emphasized that Greek authorities must continue to work closely with the institutions in order to maintain the “positive momentum” which has already been generated.