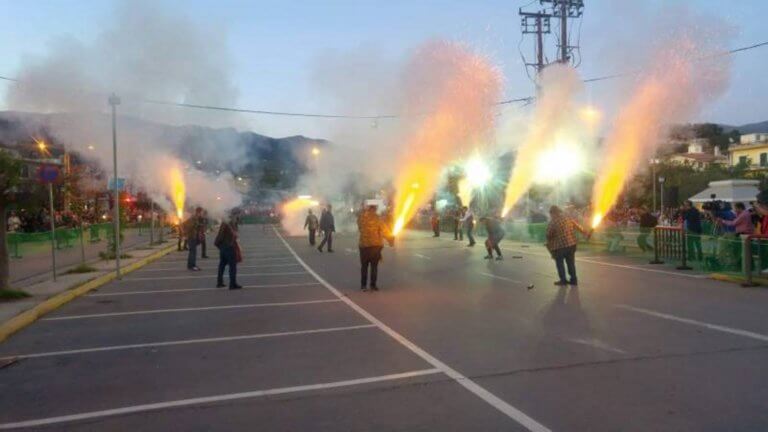 A 53-year-old man was killed on Easter Sunday night while videotaping the traditional “Saitopolemos” (σαϊτοπόλεμος) fireworks competition in Kalamata.
According to police, it was around eight o’clock on Easter Sunday evening, and the traditional firework competition was beginning. The victim, who was holding his camera at the time, was hit in he head by the rocket, which had been fired off by a man who was participating in the Nedontas parking lot competition.
The 53-year-old was recording the event for a news website. The victim was transported to the Kalamata Hospital, where he was pronounced dead.
The Saitopolemos tradition in Kalamata is part of the city’s annual Easter celebrations. The tradition calls for men to dance the zeimbekiko while holding firework rockets.
Friends or neighbors form groups which compete with each other, dancing the dance of fire which they call the “rocket fireworks war.”
Police arrested seven people participating in the Saitopolomos after the fatal incident. Among them was a city council member who is responsible for organizing the event.
Kalamata Mayor Panagiotis Nikas said on local radio that even though he knows there will be demands to cancel the Saitopolemos tradition, he will not ban the annual Easter competition.
Watch video from the 2018 saitopolemos below: