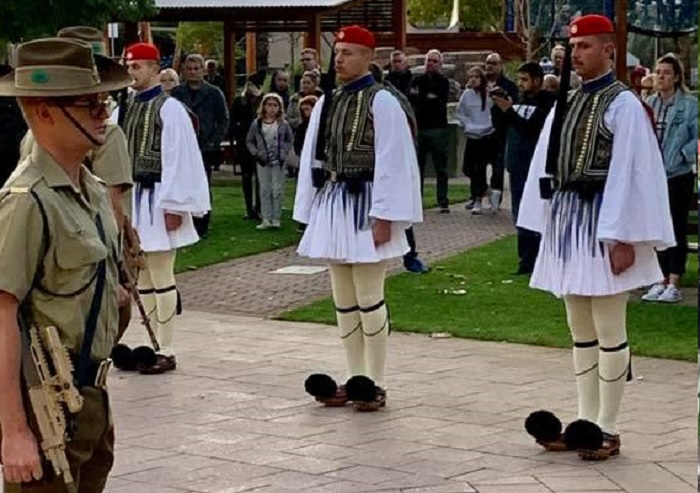 The evzones marched along Australian soldiers in the streets of Adelaide, which was the only Australian city to be graced with the presence of Evzones as part of Anzac services.

Tens of thousands of Australians rose early to honor war veterans at dawn services across the nation.

Today’s Anzac services mark the 104th anniversary of the landing of Australian and New Zealand soldiers as part of the Allied assault on the Turkish Peninsula in the First World War.

Evzones in Adelaide on Anzac Day

On Wednesday, the evzones were welcomed to Adelaide by the premier of South Australia, Steven Marshall, who held a private reception in their honor.

“I would like to extend an extraordinarily warm welcome to the representatives of the Hellenic Presidential Guard who are with us,” the premier said.

“History, time and circumstances have brought Greece and Australia together helping to forge unique cultural and ancestral bonds that have lasted generations and have strengthened over time. On behalf of the people of SA, I would like to thank President of the Hellenic Republic Prokopis Pavlopoulos for giving permission for the Evzones to return to Adelaide,” stated Marshall.

The Greek Presidential Guard will remain in Adelaide for seven days, and their time there will be filled with activities, including participation in this year’s many Greek Orthodox Easter celebrations.