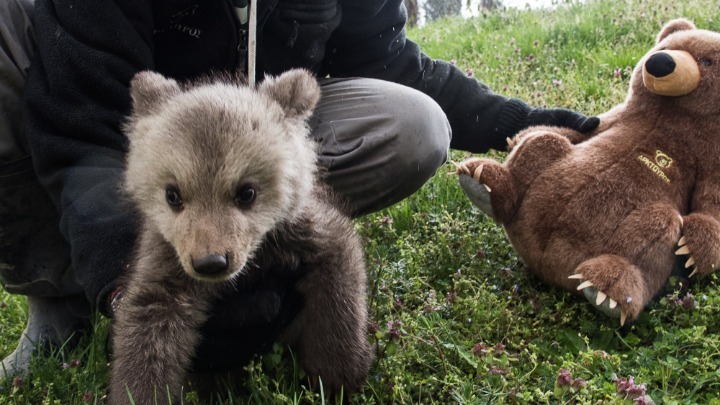 The brown bear sanctuary “Arcturos” on Tuesday announced the adoption of two three-month-old orphaned bear cubs – named “Bradley” and “Cooper” – which were found by a farmer in Oinoi, Kozani near his sheep pen.
The farmer unfortunately kept and cared for the two cubs for about a week before calling Arcturos, with the organization noting that this hampered efforts to return them to their mother.
“The long period that intervened between the cubs being found and their delivery, unfortunately, means it is not possible to search for their mother, something that is always done in such cases,” the group said.

The bear cubs have been transferred to the Veterinary Station at Aetos, Florina and will be raised together for about a year, far from other bears and with minimal human presence, in accordance with a strict raising protocol.
The aim is for experienced handlers to teach the cubs how to survive in the wild, just as they would have been taught by their own mother.
“Bradley” and “Cooper” will join an additional five cubs that were adopted by Arcturos last year and are due to be released into the wild next month – three in Bulgaria, where they originated, and two in Greece.
The two new cubs were examined by a vet on Tuesday and, while they were seen to have been slightly underfed, were declared to be in very good condition. They are very fond of playing, especially sparring or play-fighting, which Bradley usually wins because he is slightly larger.
Prompted by this recent incident, Arcturos issued a message reminding members of the public who might come across a cub alone in the woods that they are not necessarily orphans or abandoned, and that their mother might be somewhere close by.
“For this reason, they must not approach or try to catch bear cubs, but immediately inform the forestry service, police or Arcturos and stay on hand to show the location where the cubs were found,” the organization noted.
Even though Bradley and Cooper will have a second chance to live free in nature through Arturos’ “Return to the wild” program, “the best outcome would have been for them to live with their mother,” the organization added.