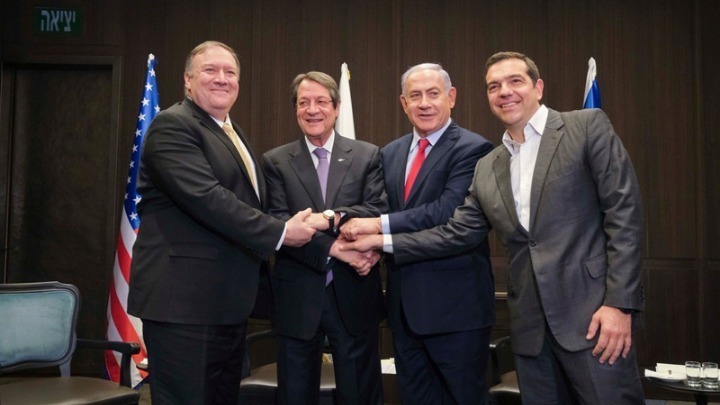 The Leaders of Greece, Cyprus and Israel met in Jerusalem on Wednesday evening, during the sixth Trilateral Greece-Cyprus-Israel Summit, which was also attended by the US Secretary of State, Mike Pompeo.
The Prime Ministers of Greece and Israel, Alexis Tsipras and Benjamin Netanyahu along with the President of the Republic of Cyprus, Nicos Anastasiades agreed upon the significance of the ”EastMed” pipeline.
EastMed is a gigantic project that aims to connect Israel with Cyprus and Greece to transfer natural gas from Eastern Mediterranean to the European Union, strengthening the energy independence of Europe.
The presence of Mike Pompeo signaled the full support of the US to the cooperation between Greece, Cyprus and Israel, as the American Administration is committed to promoting Energy security in Europe.
Pompeo interlinked the issues of energy and security and pointed out that when, last week, he spoke with a large group of heads of energy organizations in Houston, he emphasized that the right opportunities are indeed being developed by the creation of infrastructures, and that this will be most beneficial.
He underlined that “the US, Greece, Israel and Cyprus are significant basic partners in security and prosperity,” and that he looks forward to these talks in Jerusalem.
He also pointed out that cooperating on energy issues will strengthen both prosperity and security in these countries, while highlighting that powers like Iran, China and Russia have expansionist tendencies in the Middle East as well as in the West.
“We are free countries, free-market countries, working together and working to create energy infrastructures, this is when better security follows, and if we do it properly we will attract investment and maximize these resources, as it happens when good infrastructures in free markets brings about these results,” Pompeo said.
Tsipras: EastMed will boost security
“Our basic idea is very significant – to create a secure network to transfer energy resources from the region of the Eastern Mediterranean, from Israel, Cyprus and Greece, to Europe,” said Tsipras in brief remarks at the beginning of the summit referring to the planned construction of the EastMed pipeline to transfer gas from Israel and Cyprus to Greece and on to Italy.
Tsipras said its construction will boost dialogue over security in a volatile region and strengthen the economies of the three countries.
An agreement between the three countries on the pipeline was concluded last December at the fifth trilateral summit in Beersheba in Israel.
However, developments on the pipeline are not likely until after the European elections in May as Italy’s signature will be required. Rome has reportedly asked to do this after the elections.