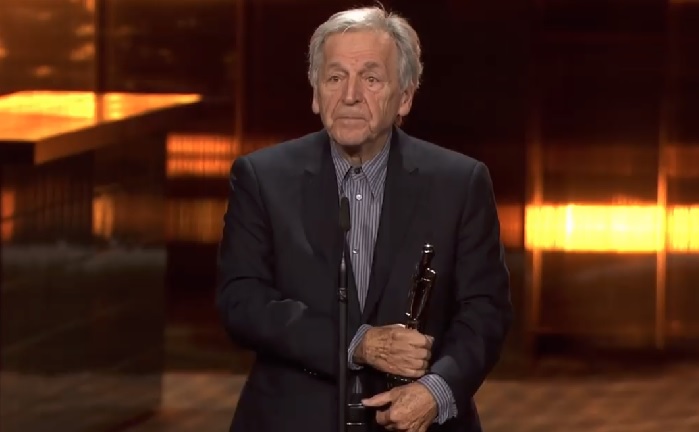 The legendary filmmaker, who directed classics such as “Missing”, “Z”, “Music Box” and “Betrayed”, was honored by the European Film Academy at the 31st European Film Awards on Dec. 15 in Seville, Spain.

#efa2018 – Honorary Award of the EFA President and Board

Director Costa-Gavras receives the Honorary Award of the EFA President and Board, a special tribute for an outstanding director and personality with a strong political voice, celebrated by audiences worldwide. #efa2018

“With this award, the European Film Academy wishes to pay special tribute to an outstanding director and a personality with a strong political voice who is not only deeply respected by his colleagues but also celebrated by audiences worldwide,” the Academy said.

Costa-Gavras is only the fifth filmmaker to receive the honor. The previous recipients were Manoel de Oliveira, Michel Piccoli, Michael Caine, and Andrzej Wajda.

Born in Greece in 1933, Costa-Gavras emigrated to France when he was 22 years of age, and he has lived and worked there ever since. Perhaps the most successful director of a generation of politically-active European filmmakers, he combined controversial political issues with the slick production and commercial approach of mainstream cinema.

His most famous films portrayed right-wing dictatorships and extremists, whether in Greece during military rule (“Z”), in Latin America during the height of the Cold War (“Missing”, “State of Siege”) or among white supremacists in the United States (“Betrayed”).

His greatest success came in the period from the early 1970’s to early 1980’s. “Z”, made in 1969, was nominated for five Oscars and won two, for Best Film Editing and Best Foreign-Language Film.

The film “Missing”, from 1982, starring Jack Lemmon and Sissy Spacek, picked up four Oscar nominations, including Best Picture. It won the Oscar for best-adapted screenplay, which was shared by Costa-Gavras and Donald E. Stewart. Jessica Lange received a Best Actress Oscar nomination for her role in “Music Box”, from 1989, in which she starred as a lawyer defending her own father who had been accused of war crimes.