How Kourabiedes and Melomakarona Got their Names 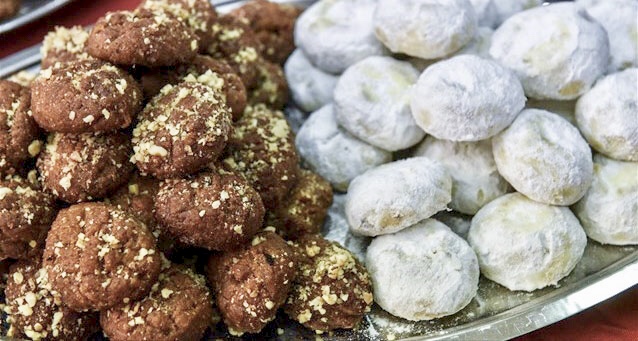 Melomakarona and kourabiedes are two words which, for Greek people, embody Christmas itself. They bring to mind the sweetness of the holiday season, both literally and figuratively.
The two traditional Christmas sweets are an integral part of Christmas and New Year’s festivities and are present at almost every table.
The etymology of melomakarono (singular) may bring to mind the Italian macaroni or the French macaroon, but its actual origin goes back to ancient Greece.
The word is derived from the medieval Greek word “Makaronia” (Μακαρωνία), which was a food eaten at a meal after funerals. It was based on pasta, and signified that the deceased was blessed, happy and lucky.
Makaronia, in turn, comes from the ancient Greek word “makaria”, which was a piece of bread having the egg shape of the modern melomakarono. This also was offered after a funeral.
Later, when makaria were dipped in honey (“meli” in Greek), the piece of bread was named melomakarono. This eventually became the most popular sweet eaten during the twelve days of Christmas. Greeks in Asia Minor also ate this delicacy but gave them the name “phoenikia”.
The Romans, and later the Italian people, changed the name to maccarone, which eventually ended up meaning pasta as we know it today.
From the Middle Ages and onward, the word and the sweet spread to France and England. In France, it became “macaroon”, an almond-flavored confection.
Kourabiedes (singular kourabies), the other Greek Christmas staple, originated from Turkey, where they are called kurabiye. In Turkish etymology the word is from the root “kuru” (dry), and “biye” (biscuit). It is a rounded butter cookie with pieces of almond inside, the entire outside covered in powdered sugar.
The word “biscuit” was formed in the Middle Ages, a derivation of the Latin “bis-cuit”, meaning baked twice. But even that word has a Greek etymology, coming from the ancient Greek root “di-pyron”.
The technique of baking things twice, as also evidenced in the modern “biscotti” type cookies, makes them very dry so that they don’t spoil quickly. In times of old, the cookies were made to last a long time so that soldiers and seafarers could take them to sea or eat them on their campaigns.
The Latin version of the bis-cuit traveled to Asia with the Venetian seafarers and merchants. On the way there, the Latin word was corrupted to “biya/biye” and “qura/kuru” (dry in Turkish), forming the word kurabiye.
Today’s melomakarona contain chopped walnuts and are sprinkled with ground walnuts as well. More modern versions have them enrobed in dark chocolate.
Sources: Dogma, Wikipedia