Everyday life in Ancient Athens of the Hellenistic era was more intellectually stimulating, and exciting, than in most ancient cities mainly due to the fact that Greeks excelled in theater and philosophy, and were involved in politics and athletics contests as well.
In addition, their culture had developed the vital art of public discourse at the agora.
Men, if they were not training as soldiers, often discussed politics in groups or went to the theater to watch tragedies or comedies for entertainment. They could strongly relate to the plays, of course, which often involved current politics and the actions of Greek gods in some form.
The men of Ancient Greece also had full citizenship status and could vote, something women were not allowed to do.
Regarding the realm of theater, women were also not allowed to even watch plays — much less act in them. The theater was a masculine affair and the roles of women were always played by males.
Men also played games which did not involve physical activity also, including marbles, dice, and checkers. The ancient Greek version of checkers was similar to the current game of backgammon — however, the Ancient Greek version of Checkers involved a board, stones and dice.
The life of women in ancient Greece was closely tied to domestic work, including spinning, weaving, cooking, and other domestic chores. They were not involved in public life or in politics whatsoever.
Females as a rule were mostly confined to the house, although one vital public duty for them was to serve as priestesses at temples. 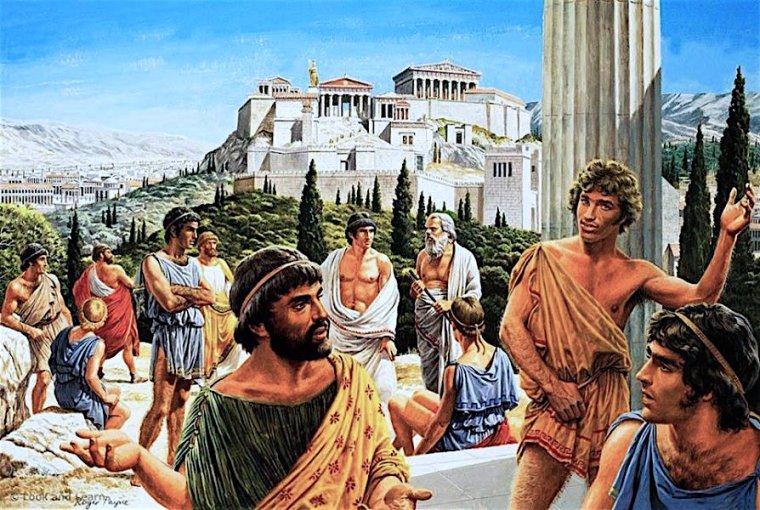 Ancient Athenians had to eat, of course as well. It was only natural that the majority of them made their living and put food on the table from farming. Citizens often owned land outside the city which provided their income.
The Greek landscape and climate, however, made farming a difficult endeavor.
In September it was time to harvest the grapes, which were either kept for eating or used to make wine. Winemaking wine was done by treading the grapes by foot and then keeping the juice in enormous casks to ferment.
Olives were either picked by hand or knocked out of the tress with wooden sticks. Some were crushed in a press to produce olive oil and others were kept to be eaten as is. Olive oil was extremely important to ancient Athenians, since it had many uses, such as cooking, lighting, beauty products and for athletic purposes.
Olives and their associated products were so vital to the economy that uprooting an olive tree was a criminal offense in Ancient Greece.
Grains were usually harvested in October to ensure they would be able to grow during the wettest season. The farmer would use a plough driven by oxen while a second man would follow behind, sowing the seeds.
In Spring, crops were harvested using sickles. After harvesting the grain, it was then threshed, using mules and the help of the wind to separate the chaff from the grain. The husks were then removed by pounding the grain with a mortar and pestle.
Ancient Athenians ate bread made of barley or wheat, along with porridge, accompanied by cheese, vegetables, fish, eggs and fruit. Animals such as deer, hare, and boars were hunted as well, but their meat was only used as an addition to the staple foods.
Seasoning usually involved coriander and sesame seeds. Honey was most likely the only sweetener that existed at the time, and honey’s great importance in ancient Greece is demonstrated by beehives being housed in terracotta vases.

Athenian boys played games similar to today’s hockey and they also participated in a lot of different types of athletics, including road races and calisthenics. Since they usually played naked, girls were forbidden to watch any athletic competitions.
Overall, women and girls were not expected perform much physical activity for recreational purposes.
Children in ancient Greece usually occupied their time playing with toys and games. We know from archaeological research that they played with balls, miniature chariots, rattles, yo-yos, rocking horses, and dolls and animals made from clay.
Boys were taught at home by their mothers until they were 6 or 7 years old. In Athens, all further education was left up to the father, and students were taught by private schoolmasters after that age.
The boys from wealthy families were taken to school by a trusted slave. The students learned to write by using a stylus on wax-covered tablets. Books were exceptionally expensive, so they were very rare.
The students in Athens learned to add, subtract, multiply, and divide. They also learned about fractions. Students learned the poems of Homer — surely knowing much of them by heart —  and how to play the lyre.
Wealthy children also learned to ride horseback. Other sports included wrestling, archery, using a sling, and swimming. At age 14 boys attended a higher school for four more years. Then at age 18 boys were sent to a military school from which they would graduate at age 20.