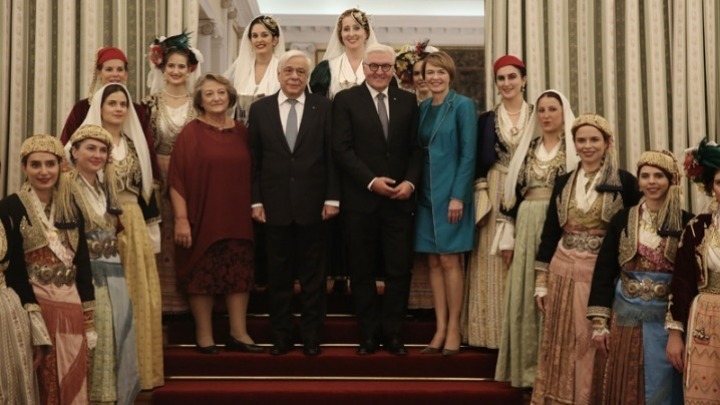 Greece still seeks reparations for its victims of World War Two and repayment for a loan it was forced to make to its Nazi occupiers, President Prokopis Pavlopoulos told his visiting German counterpart on Thursday.
Reparations are “legally active and judicially enforceable,” Pavlopoulos said on Thursday, in his address at an official dinner held in honor of visiting German President Frank-Walter Steinmeier and his wife Elke Budenbender.
Pavlopoulos said that Greece’s demands were not unilateral or arbitrary but made in the context of a shared international and European legal culture, on the basis of which every side is free to support its positions before a jurisdictional forum.
Germany has apologized for Nazi-era crimes during the war but has said it is not willing to discuss reparations. It has denied owing anything to Greece for World War Two since it paid Athens the sum of 115 million deutschmarks in 1960.
Welcoming the German presidential couple as “true friends of Greece”, however, he said Steinmeier had actively demonstrated his support for Greece during the difficult years of the memorandum programmes, making decisive contributions in the often thorny negotiations of that period.
“We Greeks will never forget that you were a champion of the position that, as Greece cannot conceive of its future outside the European Union and the European edifice, so present-day Europe would be inconceivable without Greece in its ranks,” the Greek president said.