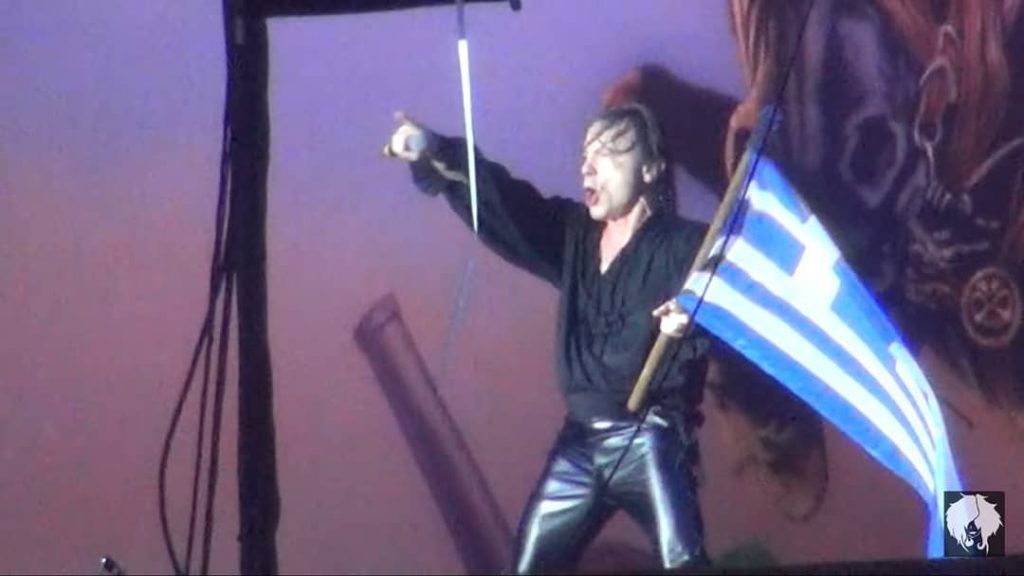 Heavy metal legends Iron Maiden, a band immensely popular in Greece, played to a sold-out crowd in Malakasa, near Athens, with singer Bruce Dickinson raising the Greek flag.
The 36,000-strong crowd also demanded from the band to play “Alexander the Great“, a song Iron Maiden never play live. In the past they have said that due to its complexity, it doesn’t come out as they want it in a live show.
Yet, the British band treated the Greeks to a chorus of the song at the end of the show amidst thunderous applause.
Given the recent controversial agreement between Athens and Skopje over the Balkan country’s name, the lyrics of the song become all too relevant, with most Greek fans asking the band to play the song.
Below are the lyrics to the song:
“Alexander the Great”
“My son ask for thyself another
Kingdom, for that which I leave
is too small for thee”
(King Philip of Macedonia – 339 B.C.)
Near to the east
In a part of ancient Greece
In an ancient land called Macedonia
Was born a son
To Philip of Macedon
The legend his name was Alexander
At the age of nineteen
He became the Macedon King
And he swore to free all of Asia Minor
By the Aegean Sea
In 334 B.C.
He utterly beat the armies of Persia
Alexander the Great
His name struck fear into hearts of men
Alexander the Great
Became a legend ‘mongst mortal men
King Darius the third
Defeated fled Persia
The Scythians fell by the river Jaxartes
Then Egypt fell to the Macedon King as well
And he founded the city called Alexandria
By the Tigris river
He met King Darius again
And crushed him again in the battle of Arbela
Entering Babylon
And Susa, treasures he found
Took Persepolis the capital of Persia
Alexander the Great
His name struck fear into hearts of men
Alexander the Great
Became a God amongst mortal men
A Phrygian King had bound a chariot yoke
And Alexander cut the ‘Gordian knot’
And legend said that who untied the knot
He would become the master of Asia
Hellenism he spread far and wide
The Macedonian learned mind
Their culture was a western way of life
He paved the way for Christianity
Marching on, marching on
The battle weary marching side by side
Alexander’s army line by line
They wouldn’t follow him to India
Tired of the combat, pain and the glory
Alexander the Great
His name struck fear into hearts of men
Alexander the Great
He died of fever in Babylon”