Who is Dimitrios Pagourtzis, the Greek American Texas Shooter?

Dimitrios Pagourtzis, a 17-year-old student of Greek descent, was charged with capital murder for the killing of 10 people at a high school in Santa Fe, Texas on Friday.

Pagourtzis, the son of a Greek immigrant who owns a marine repair company and a mother who works at a medical center, did not enter a plea and was denied bond. He was being held in solitary confinement.

Accorsing to the authorities, he planned to kill his peers and then himself. However, after he opened fire indiscriminately inside an arts classroom he did not commit suicide. He simply surrendered.

Gov. Greg Abbott of Texas said “that he didn’t have the courage to commit the [planned] suicide.”

Pagourtzis had used a shotgun and .38 revolver, both of which appeared to be obtained from the suspect’s father, who legally owned them.

It was the nation’s deadliest school shooting since the February attack in Parkland, Florida, that killed 17 people and re-energized the gun-control movement after surviving teens launched a campaign for reform.

The Greek American community is in shock following the killings. Some say that this is because Pagourtzis is the first in modern Greek history to commit mass murder.

As the small Texas town mourns its dead more details are emerging about Pagourtzis’ past that offer clues on his motives.

Three weeks before the shootings he posted a photo to what appears to have been his Instagram account with a picture of a knife and a handgun on a mattress and a profane caption. 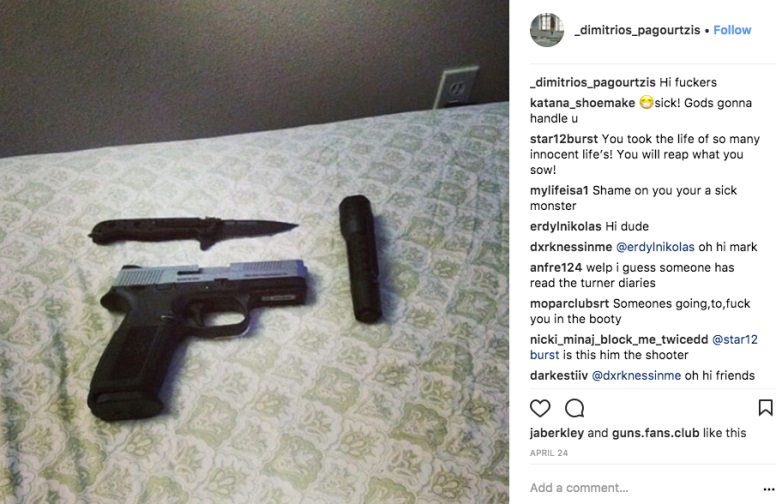 He followed only 13 other Instagram accounts, and eight of them were fan pages for firearms. The others include the official accounts for the White House, President Donald Trump, Ivanka Trump and Melania Trump’s official @FLOTUS account.

On his Facebook page, Pagourtzis posted a photo on April 30 that seems chilling in retrospect: a T-shirt spread out on a bed with the slogan “Born to Kill.” 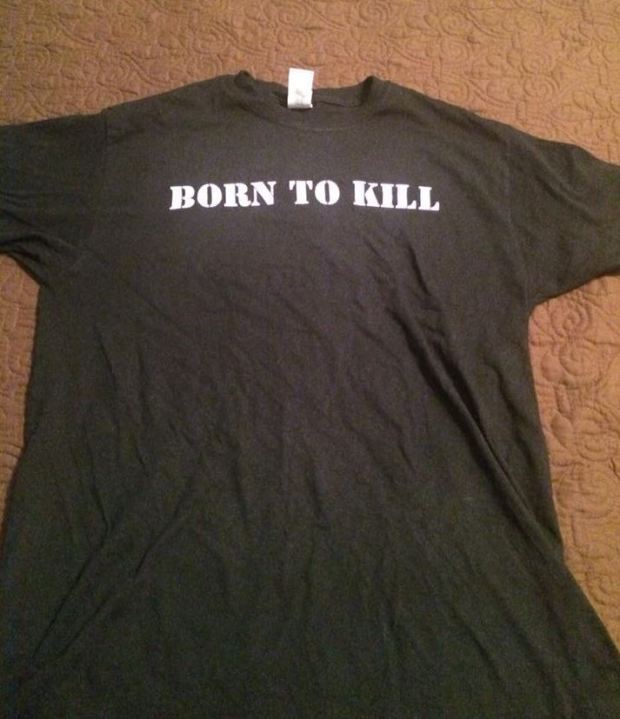 The same day the 17-year-old put up a photo of a trenchcoat — like the one classmates say he wore to school most days — covered with pins, including the Iron Cross, a German military medal sometimes associated with Nazis, and a symbol of a goat head that is connected to the Church of Satan.

The caption below the photo appeared to be an explanation of the meaning of some of the other pins: He captioned the photo: “Hammer and Sickle = Rebellion,” “Rising Sun = Kamikaze Tactics,” “Iron Cross = Bravery,” “Baphomet = Evil,” “Cthulhu = Power.”

Pagourtzis plays on the Santa Fe High School junior varsity football team, and is a member of a dance squad with a local Greek Orthodox church. 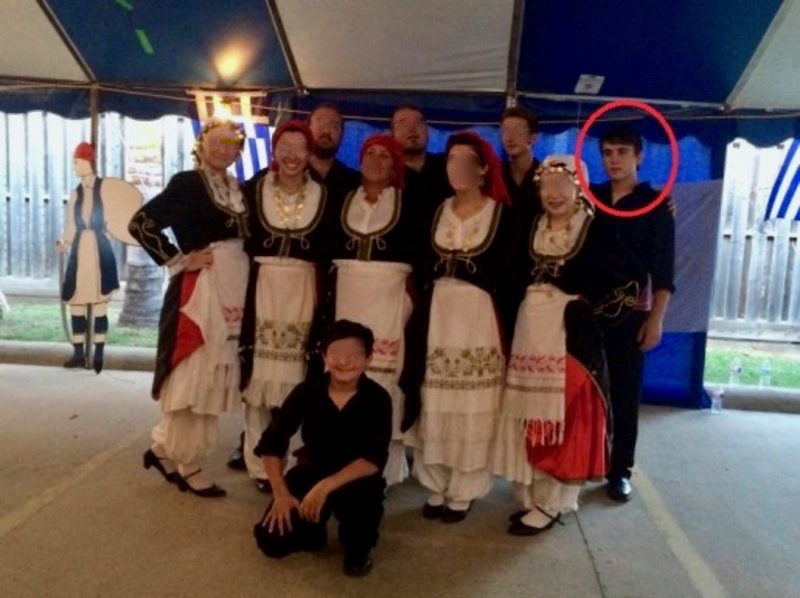 His father Antonios Pagourtzis is an immigrant from Greece, according to his Facebook page. “He worked at North American Marine, Inc.,” lives in Houston, Texas, and is from Magoulítsa, Kardhitsa, Greece, the Facebook page says.

His mother is Rosemarie K Pagourtzis and is listed in a Texas Tribune salaries database as “Administrative Associate in Pediatric Endocrinology, a department of The University of Texas Medical Branch at Galveston.”

A woman who answered the phone at a number associated with the Pagourtzis family declined to speak with the Associated Press (AP).

She said: “Give us our time right now, thank you.”

Father Stelios Sitaras of Assumption of the Virgin Mary Greek Orthodox Church in Galveston, Texas, said he had never heard of the teen being in any sort of trouble.

“He is a quiet boy,” the priest said. “You would never think he would do anything like this,” he was quoted as saying by the AP.

He said that the family are members of a nearby parish but he met Pagourtzis when the young man danced with a group as part of an annual festival in October.