GRNews
GreekReporter.comGreeceGreece Honors Heroine of War of Independence 193 Years After her Death 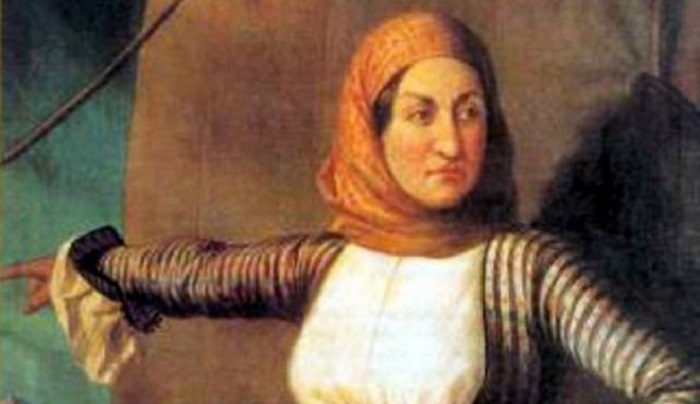 Greece’s Ministry of National Defence honored Laskarina Bouboulina, a heroine of the Greek War of Independence in 1821, by awarding her the rank of vice-admiral.
The posthumous award, almost two centuries after her death, was in recognition of her role as revolutionary and naval commander in the creation of modern Greece.
Bouboulina was the first to raise the revolutionary flag, flying a modified Greek flag from the mast of the Agamemnon.
She assisted the people of Spetses in their revolt before sailing with eight ships to Nafplion to begin a naval blockade.
She later took part in the blockade and capture of the coastal cities of Monemvasia and Pylos. She was also present at the fall of Tripoli in September 1821.
Over the course of the war, Bouboulina was considered an equal with other revolutionary commanders and was involved in planning their strategy.
She became good friends with General Theodoros Kolokotronis and their children later married.
She settled in Nafplion, the new Greek capital, until 1824 when the Greek factions turned on each other in civil war.
In 1825 Bouboulina was killed in an argument with the head of the Koutsis family, whose daughter Bouboulina’s son had eloped with.
Criticisms
It is not clear what tangible effect honoring Bouboulina, 193 years after her death, will have.
Some social media users in Greece have reacted with ironic comments.
One says its high time to award Theodoros Kolokotronis the rank of marshall. Another says that mythical Ikarus should be awarded the rank of air marshall.
Opposition politicians have also joined the chorus of criticism singling out Minister of Defence, Panos Kammenos who is alleged the politician who advocated for the posthumous award.
New Democracy’s Giorgos Koumoutsakos says that the initiative is a “gesture of cheap populism” by “a brainless politician” who is exploiting historic personalities of the Greek nation.