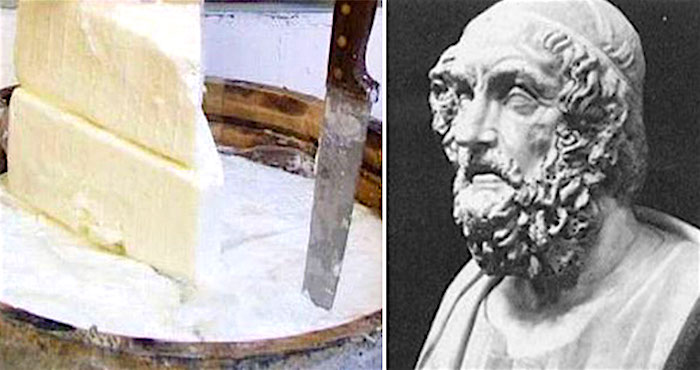 Greece applied way back in 1994 for the European Union’s coveted “Protected Designation of Origin” (PDO) status for one of its national treasures, feta cheese.
It was argued by several other European nations that feta was simply derived from the Italian word “feta”, meaning “slice,” that the product was a generic term for any sheep or goat’s milk cheese, and that it could be produced anywhere.
After years of debate about its origin with other European Union states such as Germany, France, Denmark and the UK, Greece finally won its fight for PDO status for feta cheese in 2005.
Not only is feta now recognized as the ultimate Greek cheese, we can discover that its roots actually stretch all the way back into antiquity.
The “Real Greek Feta” website provides great evidence that the first mention of the famous cheese is as old as Homer’s “Odyssey.”
When Odysseus and his men enter the cave of Polyphemus, the Cyclops, the first thing they notice is the smell and sight of the rich, white cheese made with goat and sheep’s milk in brine:
“We entered the cave, but he wasn’t there, only his plump sheep grazed in the meadow. The woven baskets were full of cheese, the folds were full of sheep and goats and all his pots, tubs and churns where he drew the milk, were full of whey. When half of the snow-white milk curdled he collected it, put it in the woven baskets, and kept the other half in a tub to drink,” Homer wrote.
According to myth, the Cyclops Polyphemus created the cheese which was later to be dubbed feta purely by accident. He had been transporting the rich milk that he had collected from his sheep in leather bags made of animal stomachs, when one day he realized that the milk had curdled.
It had taken on a solid form which was not only tasty, but most importantly, was conservable for some time. Given that the “Odyssey” was written in the eighth century BC, the origin of feta must be seen as indisputably Greek.
The ancient Greeks called the product which came from the coagulation of milk “τυρí,” or “cheese.” The name Feta, which does literally mean “slice,” originated in the seventeenth century, and probably refers to the practice of cutting the cheese in slices to be placed into barrels.
The name Feta came into widespread use in the nineteenth century. Ever since then it has characterized this tangy cheese that has been prepared for centuries using the same general method, and whose origin most likely dates back to the earliest days of human habitation in Greece.

Magnificent Golden Comb Made by Greek Master a Highlight of Hermitage