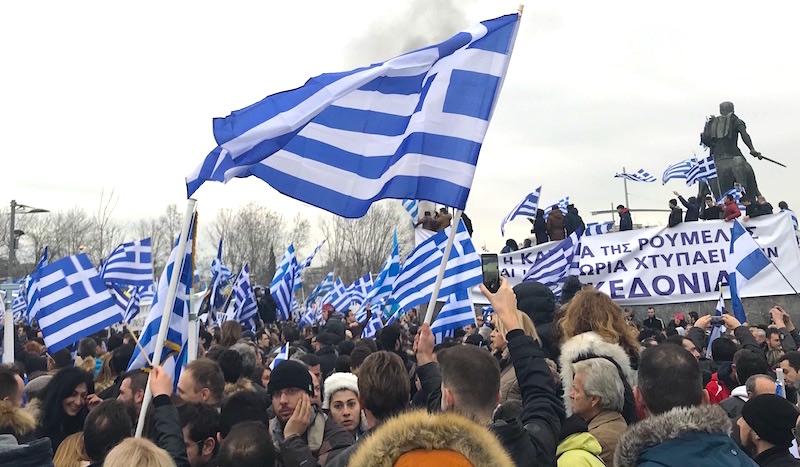 Hundreds of thousands of Greeks in the country’s second largest city of Thessaloniki rallied on Sunday to protest against the use of the name “Macedonia” in any solution to a row between Athens and Skopje over the name of the former Yugoslav republic.
Greek police said that more than 90,000 people participated in the protest carrying Greek flags and chanting pro-Macedonia slogans, but other eyewitnesses put the number of protesters from the largest Macedonia prefecture in over 150,000.
It was one of the largest protests in Greece in recent years and the second time in a quarter of a century that Northern Greeks have gathered to protest over the FYROM name issue.
On Valentine’s Day 1992 hundreds of thousands of protesters swarmed the city of Thessaloniki in a rally against the use of “Republic of Macedonia” by then newly formed FYROM, co-organised by the Greek church. A few months later, on December 10, a crowd close to a million protesters gathered in downtown Athens for a similar rally.
In Thessaloniki on Sunday, there were at least 500 buses full of protesters from all around Greece. The massive protest took place at the center of the city at 2 pm local time and lasted about 3.5 hours.


The crowd included clergymen, members of Macedonian unions from Northern Greece, conservative and socialist local politicians and retired military officers. The rally had no official political affiliation.
The event’s page stated that the protest was not affiliated with any political parties and aimed at sending a clear message to FYROM to stop using the word “Macedonia” in their name. 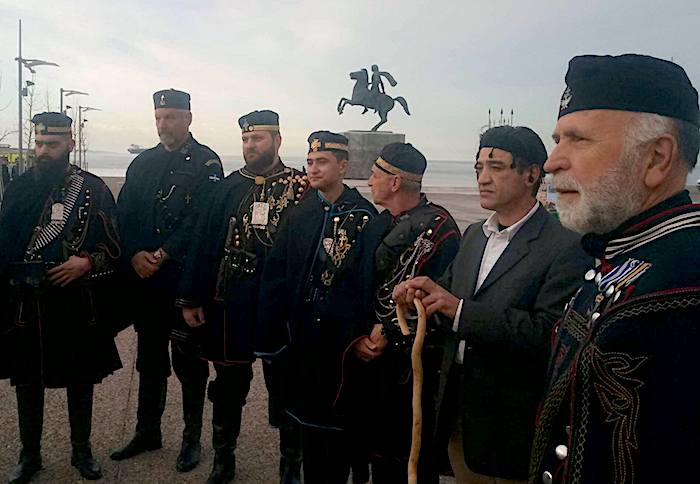 With loudspeakers playing songs of legendary Greek composer Mikis Theodorakis, the crowd was chanting slogans such as “Greece – Greece – Macedonia”, “No double (FYROM) naming, no more betrayals” and “Macedonia is Greek”.
Various speakers, mostly journalists and retired military men, stressed that Macedonia is Greek, with some historical references, an anathema against UN mediator Matthew Nimetz and a few veiled threats towards any Greek politician who “dares vote for the inclusion of the term ‘Macedonia’ in any future FYROM name.”
Around the centre of Thessaloniki vendors in makeshift stands were selling Greek flags, Greek t-shirts, scarfs and other memorabilia related to the history of Macedonia. The protest was relatively peaceful, with just a few minor skirmishes between the police and black-shirted anarchists who have tried to infiltrate the march.

The relatively new country that was shaped after the fall of Yugoslavia named itself ‘Republic of Macedonia’ and claims to be the continuation of the Ancient Macedonian Kingdom that flourished in Greece after the decline of Athenian democracy.
Greece and FYROM have been fighting over the Macedonia name for years but recently talks resumed again for a “composite solution that would satisfy both parties” according to UN envoy Mathew Nimetz.

However, 70 percent of Greek citizens disagree with the use of Macedonia at any new name for FYROM, according to the latest poll.
“It’s totally groundless historically and absurd to seek the exclusivity of Macedonia,” prime minister Alexis Tsipras told Sunday’s Ethnos newspaper about FYROM’s insistence to use “Macedonia” as its name.
Watch Live:

“But it is not unreasonable to have the term ‘Macedonia’ included in a compound name, with either a geographical or a chronological qualifier, for all uses, to make absolutely clear that nobody claims other people’s land or history.”
The only Greek political party officially embracing the protest is that of junior government partner Independent Greeks (ANEL), but politicians from conservative New Democracy main opposition party, and other centre-left parties of parliament are taking part in the protest.
Thessaloniki mayor Yiannis Boutaris is not participating in the protest, having publicly denounced it as counter-productive to the interests of the city and those of the ongoing negotiation between Greek and FYROM officials.
No Greek TV network is covering the march live, including state TV ERT and its Northern Greece subsidiary ERT3.

Watch a video from the protest::