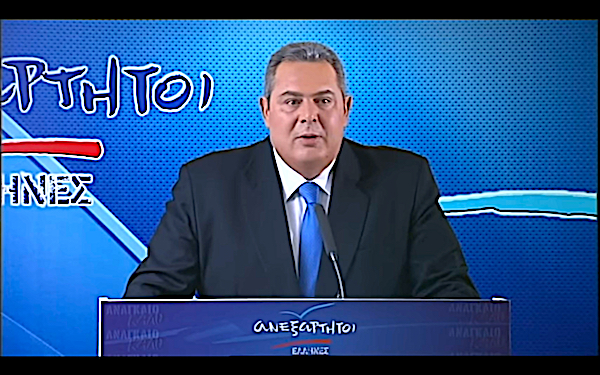 The Independent Greeks (ANEL) will call for a meeting of political leaders if they disagree with the name that will be negotiated with the former Yugoslav Republic of Macedonia (fYROM), party leader and Defence Minister Panos Kammenos said on Thursday during a meeting of ANEL lawmakers.
“There is only one Macedonia and it is Greek, like Constantine Karamanlis said. We don’t confer the Greek term ‘Macedonia’.
There are Slavic terms, such as Vardarska, which can be used and which do not contain the term Macedonia; which we do not accept,” he said.
The minister said he also does not like the geographical qualifications such as “New” or “Upper”, but expressed his absolute confidence in Foreign Minister Nikos Kotzias.
(Source: AMNA)

Temperatures in the Eastern Mediterranean are rising three times faster than the global average, with the effects of climate change already felt in Greece.
Crime