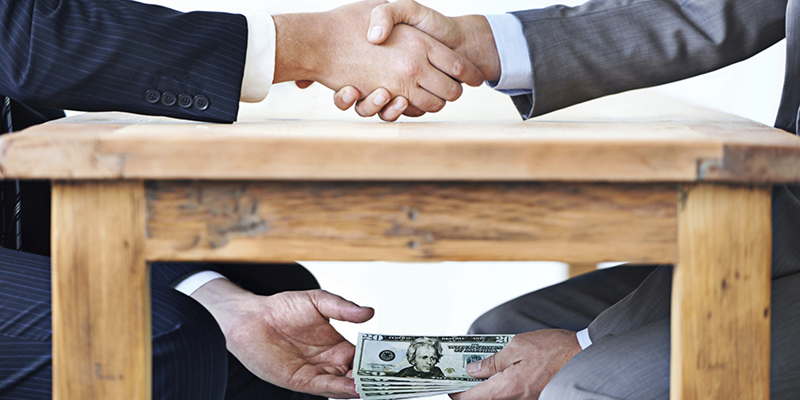 Corruption in Greece is an ongoing political issue, that has been debated to death over the past 35 years. Now a new EU Commission “Eurobarometer” poll places Greece second only behind Cyprus in corruption perception in business, in the EU.
According to the research, Cyprus (68%) and Greece (67%) are the two EU countries that present a particularly high proportion of companies which see corruption as a problem for them when doing business, compared to the EU average. Romania tops the European countries list at 85%.
Out of ten of the 28 EU Member States, less than a quarter of businesses see corruption as a problem that affects them. The figure is particularly low in Denmark (2%), and less than one in ten give this response in the United Kingdom (9%), Sweden (8%) and Ireland (8%).
There are also significant country-level differences on the issue of patronage and nepotism. As of 2015, the highest proportion of businesses giving this answer is recorded in Romania, where about eight in ten (82%) give this response.
Numbers get really depressing on the question of overall corruption on individual countries, where Cypriots and Greeks don’t even argue about the existence of corruption in their respective countries.
A staggering 100% of companies in Cyprus and an equally alarming 96% of Greek companies, say corruption is widespread in their country, followed by companies in Romania (96%) and Italy (94%).
In comparison, only just over one in ten (12%) of respondents in Denmark share this view. In 18 EU Member States, companies are now less or as likely to say that corruption is widespread than they were in 2013.
In almost all EU Member States, at least half of all companies agree too close links between business and politics lead to corruption. This view is held by almost all companies in Greece (97%), and over nine in ten of those polled in Bulgaria (94%), Romania (93%), Czech Republic and Cyprus (both 92%).
In 19 EU Member States, over three quarters (75%) of companies agree with the statement. The lowest numbers are observed in Denmark, where less than four in ten (36%) of those surveyed hold this view, while over half (55%) of businesses disagree.
Source: European Commission