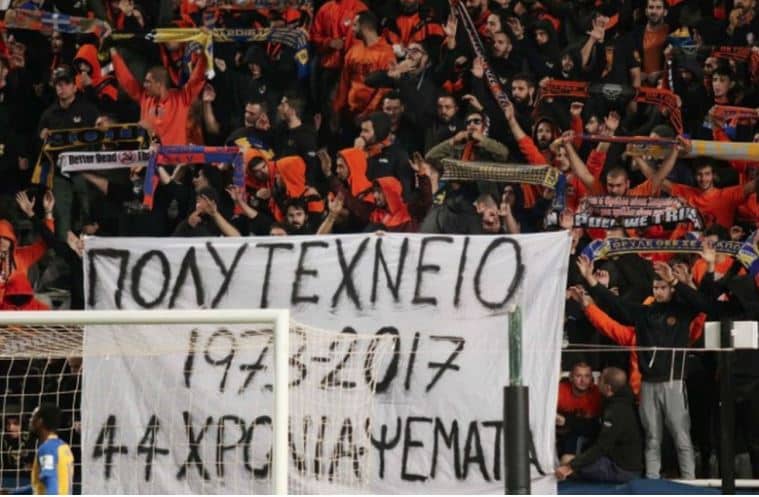 A group of Cyprus’ Apoel football club fans hoisted a banner with the slogan, ‘’Polytechnio 1973-2017, 44 years of lies,” during their club’s match against Omonia on Friday, November 17, the day on which the anniversary of the student uprising is marked.
The banner denying the 1973 Polytechnic school uprising caused an angry reaction from many people who accused the Apoel Nicosia fans of links to extremist nationalist groups. Social media users posted the photos of the victims of the uprising.
Some accused Apoel fans of embracing the neo-Nazi ideology that also denies the Holocaust took place. Images of the banner were circulated on social media. Greek media condemned the message.
The sports portal of fans of AEK Athens football club, said that the banner was the outcome of “lack of historic knowledge reaching the level of stupidity.” Other Greek media outlets characterised the banner as “shameful” and “provocative”.
Cyprus football club Omonia fans, on the other hand, hoisted a banner during the Friday match pledging their solidarity to the Greek people following the floods earlier in the week, west of Athens that claimed the lives of at least 15 people and left hundreds homeless.

ECOS announced it is a "Climate Positive" company, creating more natural resources than it consumes to produce its plant-powered products.
Greece