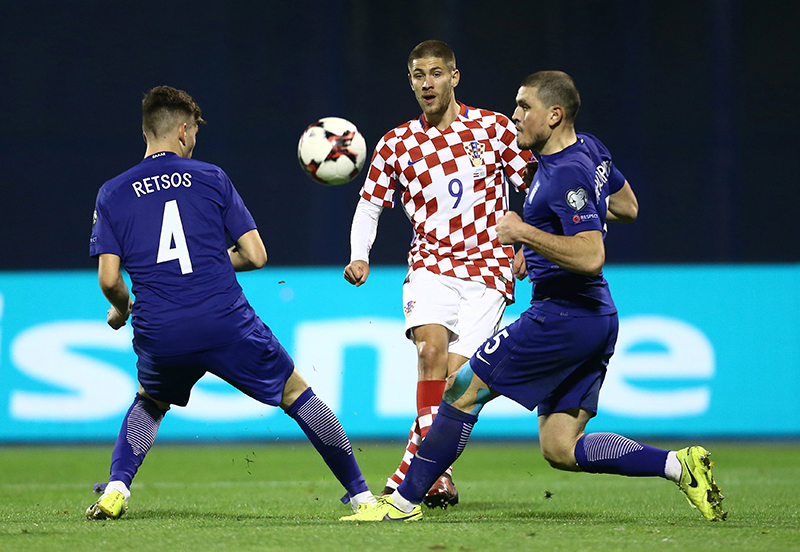 Elementary turnovers in defence cost Greece dearly in the first leg of the FIFA World Cup qualifier against Croatia in Zagreb.
Croatia moved closer to next year’s World Cup with an emphatic 4-1 home win over Greece on Thursday in the first leg of their two-legged playoff after the Balkan nation produced their most impressive qualifying performance.
The result left the Greeks with a difficult task to overhaul the deficit in Athens on Sunday if they are to reach their third successive finals.
Striker Nikola Kalinic, who stood in for the injured Mario Mandzukic, won a penalty for Croatia’s opening goal scored by captain Luka Modric and netted the second with a deft touch to give the home side a 2-0 lead at Maksimir stadium.
Kalinic latched on to a fizzing low cross by left back Ivan Strinic as Croatia did the damage on either flank in an action-packed first half.
Sokratis Papastathopoulos pulled one back for Greece before Ivan Perisic made it 3-1 with a thumping close-range header, following a superb cross by right back Sime Vrsaljko.
Andrej Kramaric scored Croatia’s fourth shortly after the break, poking the ball in from two metres after Vrsaljko had cut out a poor back pass.
The first and fourth Croatian goals were the result of amateurishly poor defending by the Greek players. One stupid turnover by goalkeeper Orestis Karnezis and some equally bad pass by Stafylides to his goalie cost the Greeks two of the four goals conceded.
Greece, missing injured full back Vasilis Torosidis and suspended central defender Kostas Manolas, were rarely able to venture forward with a conservative formation featuring Konstantinos Mitroglou as the lone striker.
Croatia keeper Danijel Subasic pulled off a good save to keep out a Mitroglou header in the 89th minute, making sure his side headed to Athens with a three-goal advantage.
Greece’s chances of overcoming this heavy defeat next Sunday in the second lef held in Piraeus are slim to none. Unless they pull yet another miracle like the one they did 12 years ago in the Euro 2004 contest, their World Cup playoff winning streak will end.