GRNews
GreekReporter.comGreeceHow the Holocaust of Arkadi Put an End to Legitimacy of Ottoman... 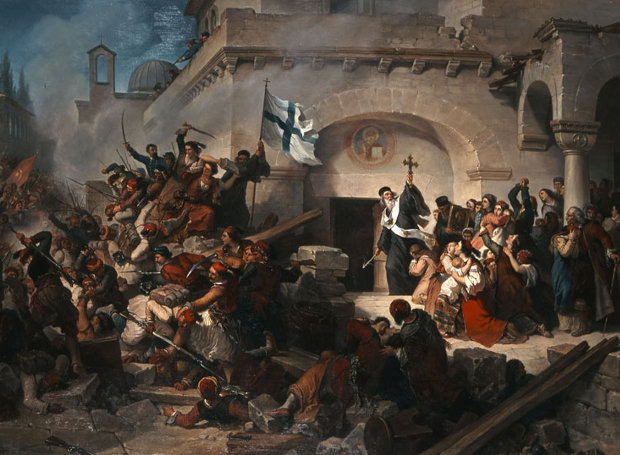 Although mainland Greece had been liberated from the Ottomans since the late 1820s, Crete was still suffering under Sultan rule.
The Ottoman oppression forced the Pancretan Assembly to meet in Chania on May 14, 1866 and draw a list of requests that was sent to the Sultan. In particular, they called for improvement of the tax system, respect for the Christian religion, recognition of the population to freely elect its own elders and to take measures for the economic development of the island.
At the same time, the Assembly sent a secret memorandum to the monarchs of England, France and Russia inviting them to act for the union of Crete with Greece. The gathering was also attended by Gabriel Marinakis; abbot of Arkadi Monastery – the revolutionary center of Rethymnon.
The Great Powers; with the exception of Russia, did not show much interest. Greece’s government at the time declared neutrality and did not take the side of the rebels openly.
Not expecting any outside help, the Cretans decided to rise up on their own and raise the Flag of the Revolution on August 21, 1866, with the slogan “Union or Death” and chiefs Ioannis Zymvracakis in Chania, Panos Koroneos in Rethymnon and Michael Korakas in Heraklion. In Greece, volunteer groups had been formed to help the Cretans with money, food and other supplies.
The Sultan; alarmed by the rebellion and on August 30, sent Mustafa Nailli Pasha to suppress the Cretans’ uprising. The Pasha first tried to persuade the rebels to return to their jobs. When they refused, he decided to implement his military plan to suppress the revolution.
The Pasha forces cleared the Chania area in September and October and then moved  to Rethymnon and the Arkadi Monastery; the seat of the local revolutionary which also served as a munitions and food storage and a refuge for many Christians.
Mustafa Nailli Pasha arrived outside the monastery on the afternoon of November 6, 1866. He had 15,000 men (Turks, Albanians, Egyptians and Turkish-Cretans) and a powerful artillery. There were 966 people inside the Monastery, of whom only 250 were men who could fight. Mostly women and children had found shelter there. The leader of the Arkadi fighters was the Peloponnese’s lieutenant Ioannis Dimakopoulos and Abbot Gabriel.
After the Cretans in the monastery refused to surrender, siege operations began on the morning of November 8. The Ottomans, despite their raging attacks, failed to take over the monastery on the first day. In the evening they asked for help and brought a large cannon from Rethymnon. The following day, November 9, the second wave of the attack began. Early in the afternoon, the western wall of the monastery was shattered by the firing guns and the attackers invaded the monastery, thus starting the massacre.
The last act of the bloody drama – and another glorious page of Greek history – was written that day. Kostis Yamboudakis, or Emmanuel Skoulas according to others, blew up the ammunition storage room; killing all the Greeks and many soldiers of the Ottoman army. Immediately thereafter, Ottomans and Albanians rushed and slaughtered the survivors, then burned down the church and looted the sacred heirlooms.
Only three or four Greeks managed to escape, while about 100 were captured. Abbot Gabriel Marinakis, had been killed before the ammunition storage explosion. Pasha’s dead and injured amounted to 1,500 or 3,000, according to later calculations.
The Holocaust of Arkadi had a great impact in the Christian world and a new wave of philhellenism was created in Europe. Significant personalities of the time; such as Giuseppe Garibaldi and Victor Hugo, took a stance in favor of the Cretan struggle and foreign volunteers rushed to reinforce the revolution. The financial contributions from Russia and the U.S.A., were also significant.
The Cretan rebels lost steam by January 1869, but the Sultan could not fully subdue the island Christians. Thus, under the pressure of the Great Powers, he was forced to draft a kind of constitution that provided privileges for Christians and a semi-autonomous status for the island. The union of Crete with Greece was postponed for 1912.