GRNews
GreekReporter.comGreeceAnarchists Clash with Police in Athens and Spray Courthouse in Larissa

Anarchists Clash with Police in Athens and Spray Courthouse in Larissa 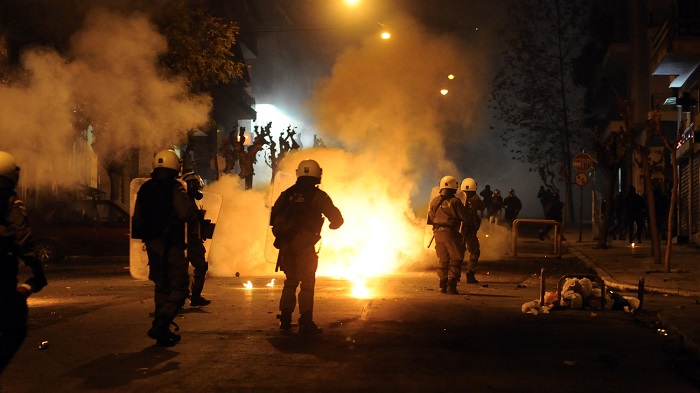 Hooded anarchists launched a barrage of petrol bomb attacks against police during extensive rioting in the notorious area of Exarcheia, Athens, on Sunday evening.
The clashes continued until the early hours of Monday morning, resulting in vehicles being damaged.  No injuries or arrests were reported.
Clashes in Exarcheia has almost become a nightly occurrence, as groups of anarchists attack police forces who are trying to keep a low profile.
The opposition is accusing the government of turning a blind eye to the anarchists, who have created a no-go area in the centre of the Greek capital.
Meanwhile, anarchists for the Rouvikonas group (Rubicon) vandalized the main courthouse in the central city of Larissa. In an attack, which was recorded on camera for propaganda purposes, a group of men threw paint at the entrance of the building in broad daylight in the centre of the city.
Correspondents say that this is the first time Rouvikonas has attacked anywhere other than Athens or Thessaloniki.