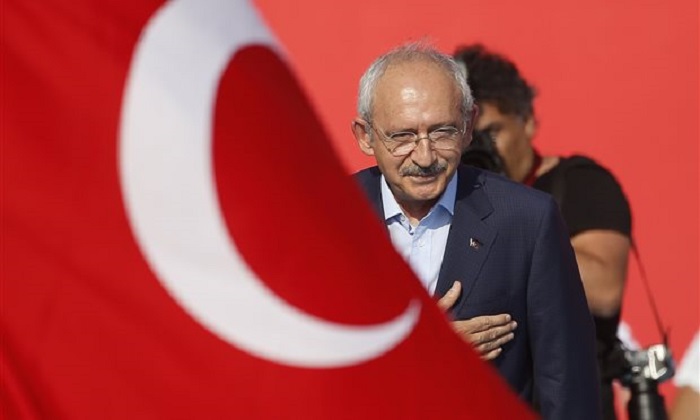 Turkey’s opposition leader Kemal Kilicdaroglu accused Turkish President Tayyip Erdogan of phony patriotism with regard to Cyprus and the Aegean.
Speaking at a meeting of Turkish industrialists on Thursday, the head of the CHP party wondered why Erdogan is not prepared to claim the Greek islands of the Aegean, in which he says are Turkish.
His outburst follows criticism leveled by Erdogan towards former Turkish president Bulent Ecevit whom he accused of being a stooge for American interests in the region.
Kilicdaroglu hit back saying that Ecevit was a patriot who “raised the Turkish flag on the mountain of Pentadaktylos” in Cyprus.
This cannot be said of Erdogan he said and continued:
“Sir, where is your nationalism? Look at islands of Aegean, they are Greek islands. The islands that should be ours are occupied by Greece. The Greek flag is fluttering on islands belonging to Turkey. I want an answer for this, Erdogan”.
It is not the first time that Kilicdaroglu has questioned the sovereignty of the Greek Aegean islands.
In 2016 he accused the Erdogan government of compromising too much with the Greeks and Greek Cypriots, and urged him to take over 18 Greeks islands in the eastern Aegean that he claimed belong to Turkey.