By Philip Chrysopoulos
October 3, 2017
Facebook
Twitter
WhatsApp
Linkedin
Email
Recent revelations that Defense Minister Panos Kammenos gambled in a London casino charging the Greek State, has generated turbulence in Syriza, with many MPs disapproving the way Alexis Tsipras supports his minister silently.
Kammenos and his wife stayed at the Mandarin Oriental Hotel in Knightsbridge between September 13 and 15, where rooms typically cost about 600 pounds a night. The total bill was 2,642 pounds.
According to the Times, the bill included gambling sessions on the roulette wheel and craps table. Kammenos claimed that he paid out of his pocket. However, it later transpired that he submitted an expenses claim.
The opposition has asked for Kammenos resignation on the grounds that the minister squandered public funds to gamble at a time when crisis-stricken Greeks cannot make ends meet.
Copies of receipts show that Kammenos invoiced the bill to “227-231 Mesogeion Street” — the address of the defense ministry in Athens. 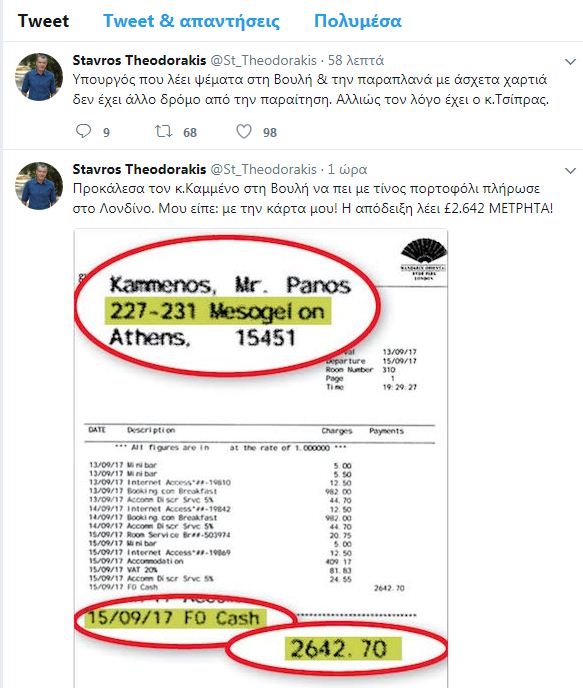 Kammenos, as leader of junior coalition partner Independent Greeks (ANEL), holds the fragile coalition together as his nine MPs along with the 144 of Syriza form a weak majority.
Two Syriza MPs have already expressed their disapproval of Kammenos’ act. Sakis Papadopoulos told Parapolitica FM that “matters concerning the ethos and attitude of ministers must be evaluated”, while Sia Anagnostopoulou told SKAI radio that “I would never go to a casino personally.”