Trade and Investment Dominate as Greece-China Committee Meets in Athens 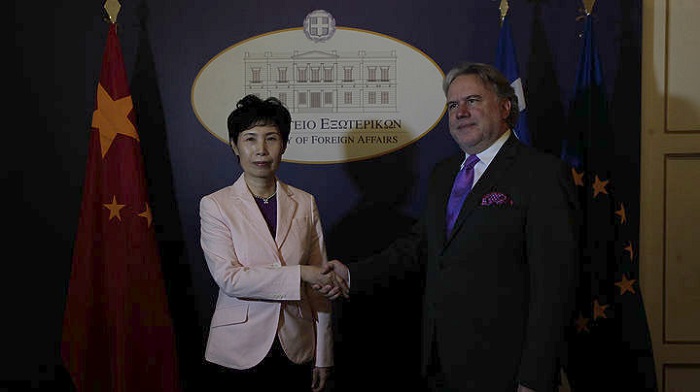 The Greece-China Committee met for the first time since November 2012, and discussed trade initiatives and investments at the 12th Joint Inter ministerial Greece-China Committee meeting, which commenced in Athens on Wednesday.
Greece’s relations with China “are at their peak right now at a political and economic level,” Alternate Foreign Minister George Katrougalos said, “and we want to be specific and produce concrete results,” he added.
The minister outlined the promising prospects of trade with the Asian country, evident from the rate of exports “which has recently been explosive, increasing by 60 pct.”
Read also: The Sky’s the Limit on China-Greece Relations Says Greek Alt Foreign Affairs Minister (video)
The head of the Chinese delegation, Deputy Commerce Minister Gao Yan, described the Cosco investment in Piraeus as exemplary and proposed the coordination of maritime and railway transportation through the Chinese strategy of “One Belt, One Road”.
She also said that China was interested in increasing Greek imports, and called on the government to facilitate investments, in order to encourage business interest in the sectors of infrastructure, energy, maritime transport and telecommunications.
Greek exports that were particularly emphasised were honey, fresh fruit (especially cherries), and feta.
Several Greek ministers attended the conference, while both sides agreed to hold the next session in China in 2018.
Source: ANA-MPA