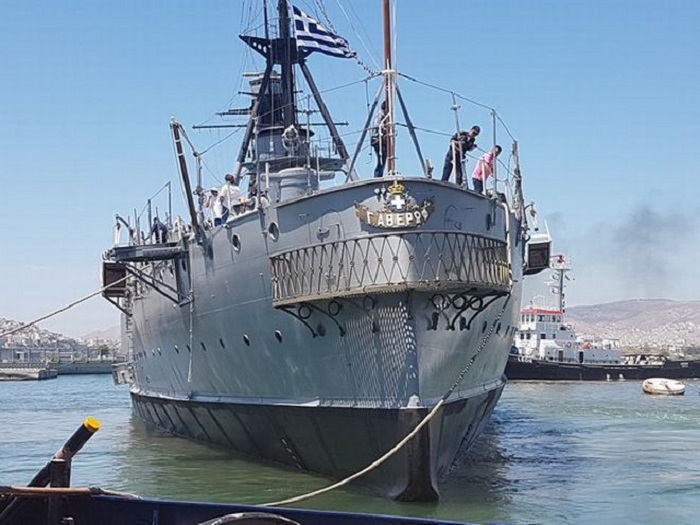 The historic ship “Georgios Averof” which served as the Greek flagship during most of the first half of the last century, arrived back at Trocadero quay, next to Faliro Marina on Wednesday.
It returned to her permanent berth after the successful completion of the planned maintenance and repair works carried out at nearby Skaramagas shipyards.
Dozens of boats belonging to private individuals and sailing clubs accompanied the battleship to Faliro.
Although popularly known as a battleship in Greek, she is in fact an armored cruiser, the only ship of this type still in existence. 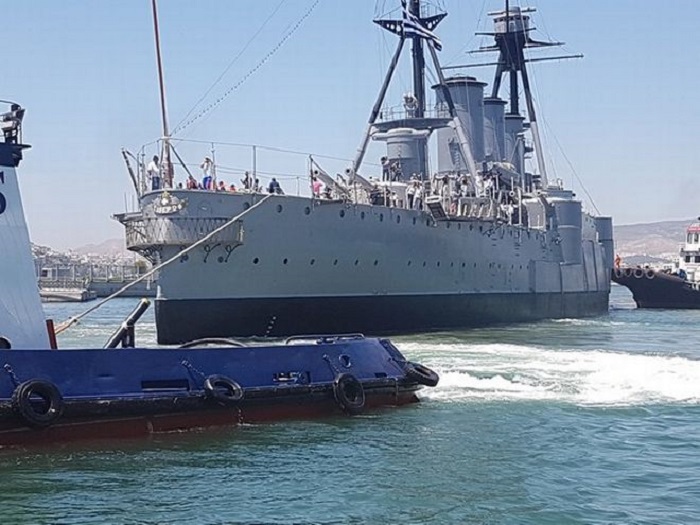 The ship was built in Italy and was launched on March 12, 1910.
During the naval battles at Elli (December 3, 1912) and Lemnos (January 5, 1913) against the Ottoman Navy, she almost single-handedly secured victory and the undisputed control of the Aegean Sea for Greece.
After Germany’s attack against Greece in 1941 and the collapse of the front, the ship’s crew disobeyed the orders to scuttle her to avoid capture by the Germans, and sailed to Souda Bay, Crete, under the constant threat of German air strikes.
On October 17, 1944, as the flagship of the exiled Hellenic Navy, under the command Captain Theodoros Koundouriotis, she carried the Greek government-in-exile back to liberated Athens. She continued as Fleet Headquarters until she was decommissioned in 1952.
In 1984 the Navy decided to restore her as a museum ship, and in the same year she was towed to Palaio Faliro, where she is anchored as a functioning floating museum, seeking to promote the historical consolidation and upkeep of the Greek naval tradition.