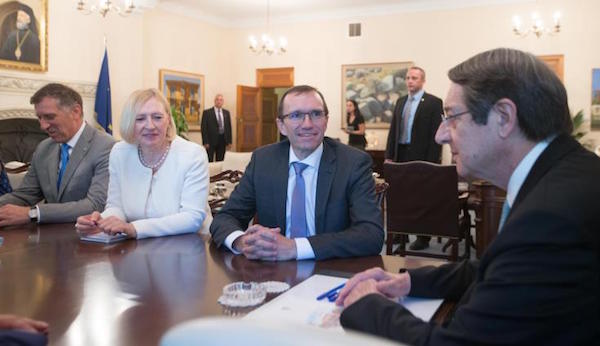 The Conference on Cyprus will take place in Crans-Montana later in June, the UN Secretary General’s Special Adviser on Cyprus Espen Barth Eide announced on Friday after a meeting he had with Cyprus President Nicos Anastasiades. Crans-Montana is a municipality in the district of Sierre in the canton of Valais, Switzerland.
Eide said that both sides have confirmed to him that “they go there with the ambition to solve the problem.”
“We know that is not a given. We have to be honest about that. It is not getting easier just because we go to Switzerland but there is determination and willingness that I can register now that we go with that ambition,” he added.
The UN envoy stressed that “this is really a historic opportunity. We all know that it’s going to be difficult. It is going to be difficult when we are there in Crans-Montana.”
President Anastasiades calls on Turkish leaders in Cyprus to be ready for action and not just words
President of the Republic of Cyprus Nicos Anastasiades called on Turkish leaders in Cyprus on Friday to be ready for action and not just words at the forthcoming Conference on Cyprus.
Speaking during the inauguration of a biological Wastewater Treatment Plant in Athienou, President Anastasiades expressed the hope that during the talks in Switzerland, “we will be in a position to talk about a united country that has overcome the problems of occupation” and that Cyprus becomes a place for all its inhabitants who will be able to create freely and hope for a better future.
Referring to the Cyprus problem, he said that the problems that are being faced are well-known.
(Source: CNA)