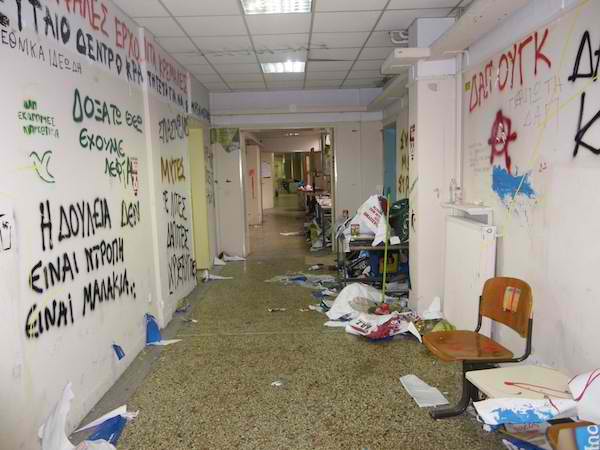 Protection of the university asylum and the participation of students’ representatives in the governing bodies of universities and the appointment of Rectorate Councils by the education ministry are included in the new bill on higher education drafted by the Ministry of Education.
The committee that drafted this bill might as well have proposed to, “Let’s go back to 1982, when we were young and had sit-ins, never went to class, had regular clashes with police and were shouting “Down with NATO.”
The new bill brings back the issue of the asylum, an issue that has been abused tremendously by students and everyone else in the past 35 years. The bill says that only the university Senate can decide whether authorities like the police can be called to enter a campus. Only the Fire Department can enter a university building or campus without the approval of the university Senate.
The asylum privilege has been abused to the point that university buildings and campuses are used as hideouts of felons, even criminals, since anyone who commits an illegal act can find “asylum” inside a university building or campus and avoid arrest.
The idea that a place of higher education is an “asylum for free exchange of ideas” has turned into a hideaway of delinquents, felons and criminals. University campuses have turned to dens of anarchy, where everyone can come and go as they please, vandalize or steal, even violently attack students, professors or campus staff.
Not that there was a difference when the asylum provision was lifted by previous governments. Only last week, during elections for student bodies, a group of hooded individuals entered the National Technical University of Athens, beat up some students they didn’t like and stabbed a security guard. Unfortunately for Greece, these phenomena are so common in campuses that are only reported briefly at the end of the news. However, in an effort to show that they are student-friendly, the committee on education decided to bring back the “asylum” article in the new bill.
As for student representation in the Rectorate, this is another privilege given to students that essentially ties the hands of university administrations. Students seldom agree with administration decisions. For instance, the issue of hiring private security staff for campuses in 2014 was met with violent reactions from party youths. No security staff was ever hired. As for Rectors and Rectorates, they cannot even report thefts taking place in campuses. When computers are stolen from university premises, university administrations report that “they are missing,” because theft is too strong a word to use.
“Intervention of public authority in universities can only take place in cases of crimes and crimes against life, and in any other case, following a decision of the Rector Council. These limitations do not apply to the Fire Brigade,” says one of the 70 articles.
In a university Senate, up to four students — three undergraduates and one postgraduate student and doctoral candidate — are appointed. Student representatives are appointed by decision of the legally elected members of all Boards of Directors of Student Associations.
University councils are abolished, replaced by Academic Councils of Higher Education and Research, with the participation of regional representatives, ministries and public officials, says another article.
Another article gives the Education Minister the authority to shut down a university or technical college if “the operation of individual universities is not scientifically justified and, on the contrary, hinders research and teaching in the respective fields of knowledge.”
Also, a higher education institution must have an internal audit service and an ethics committee.