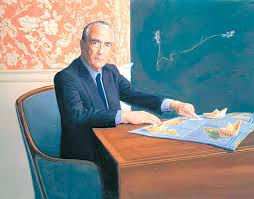 Shipowner Alexandros Goulandris took his last breath in his home next to his children and grandchildren on Thursday morning shortly before dawn.
In 1957 Alexandros’ father, Nikolaos Goulandris, passed away leaving his business to his sons Yannis, twins Alexandros and Leonidas and daughter Anna. Alexandros Goulandris was the last surviving sibling to continue the family story along with his heirs and next generation.
N.J. Goulandris Group is a leader in the Greek shipping industry, and the company is also one a part of Andriaki shipping company consisting of five oil tankers with four more expected to come; remarkably the group’s ships are Greek-flagged oil tankers.
Passionate for the sea and art and in addition to his notable business achievements in the shipping industry, Mr. Goulandris was also passionate for his charitable work. Unknown to many, it was important for him to give generously and he did so silently and with no fanfare.
The successful businessman did not, however, get through life without his own share of difficulties. Alexandros lost one of his three daughters Violanto and despite this he lived his life passing down his own values and principles that he grew up with to his other two daughters, Maria-Lula and Alexandra. In 1994, Alexandros and Marietta restored the Tourlitis Lighthouse in Andros in memory of their daughter Violanto; it has been operating ever since.
Alexandros Goulandris has left his heirs to carry on his last major project which was to “resurrect” the legendary Averof — an impressive plan that is already in place since the ship is in the Skaramagas shipyard for maintenance and repair work.
The death of his beloved wife, Marietta, this past Easter took a toll on his health, and today at dawn, a few hours after he left the hospital, Alexandros Goulandris died in his home surrounded by family. His funeral will be held next week at the First Cemetery of Athens where he will be buried next to his wife.