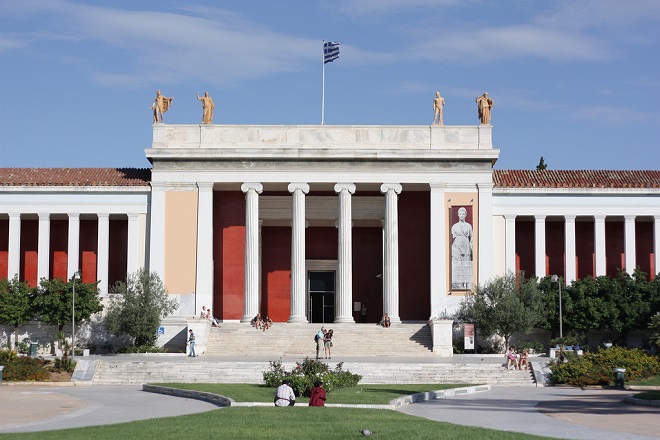 Eight crates containing 33 archaeological artifacts and 600 coins, including some ancient masterpieces dating to the 12th and 13th centuries B.C., arrived at the National Archaeological Museum in Athens from Munich on Friday.
The crates full of archaeological treasures were transported to the museum with great secrecy and opened in the museum amphitheatre in the presence of Culture Minister Lydia Koniordou, with the Athens-Macedonian News Agency invited to record the opening of the crates as the museum curators took delivery.
The remarkable finds, most in very good condition, included amphorae, bird-shaped vases, a pottery statue of a chariot driver and two riders and other small objects, most of which were possibly grave goods taken from the northwestern Peloponnese.
“Today, this is a special, touching and very important moment. What you feel from the expressions of the archaeologists and curators, the joy on their face every time the very important finds are unveiled one by one,” said Koniordou. Their return from Munich, where they were taken illegally, was “truly touching,” the minister added, noting that it was a huge success for Greek and German law enforcement agencies, which had cooperated seamlessly in a joint effort to which the Greek general consul in Munich had also contributed greatly.
The minister said that the 33 objects dated to the late Bronze age, had very interesting shapes and patterns, while most appeared to come from the same pottery workshop. There were also small objects from the Geometric period that were “real masterpieces” and 600 coins, she said.
“It is a non-negotiable principle of the Greek state to combat illegal antiquities smuggling and protect cultural heritage by any means. It is our desire that these illegally acquired ancient treasures should return to the areas from which they were stolen. We are already discussing how specific antiquities will be presented at the best time and in the best way to the public,” Koniordou said.
The finds linked to an international ring of illegal antiquities traders dismantled in Patras last October have been transferred to museum conservation workshops, while a committee has been set up to assess their authenticity and value.
(Source: ANA-MPA)