GRNews
GreekReporter.comGreecePavlopoulos to Hollande: We Must Fight for a Strong and Prosperous Europe

Pavlopoulos to Hollande: We Must Fight for a Strong and Prosperous Europe 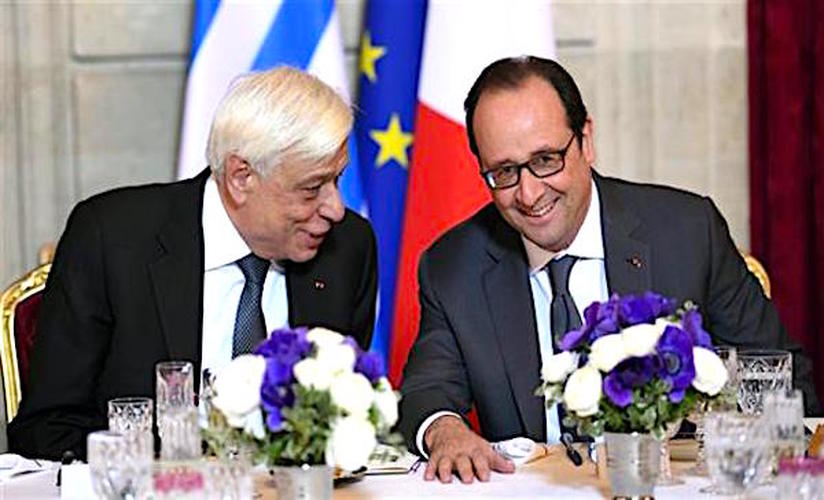 Greeks are ready to fight for a strong and prosperous Europe based on its core values, President Prokopis Pavlopoulos said on Monday evening at the formal dinner held in his honor by French President Francois Hollande in Paris, following a joint press conference.
“I bring in my luggage from Athens the fundamental principles of the European Union and based on these principles, I came to join forces together with the other partners with whom we share a common European consciousness and a corresponding anxiety, to defend the EU’s future at a critical juncture, when clouds are gathering ominously over the European sky (…) We Greeks are ready not to compromise for a Europe without prospects and social cohesion, but for a Europe which is strong and prosperous, based on its core values,” he said.
According to the Greek President, the main problem in Europe is migration and finding a solution – a problem which first requires an end to the war in Syria. “And for Syria, we need cooperation between Europe, the United States and Russia,” he said and added: “We have to (…) resolve the refugee issue of ‘epic proportions,’ as [U.S.] President Barack Obama said. But in a way that fit European humanism and European culture.”
Speaking to Hollande, Pavlopoulos noted that Greeks are trying to resolve their problems while maintaining a European path, believing that their problems are also Europe’s problems, citing the recent questioning of the Lausanne Treaty as an example.
“Whoever questions the Treaty of Lausanne, which is an integral part of international law, harms international law and jeopardizes his own status as a democratic member of the international community,” he said. “We Greeks see this threat not only for the Greek borders, but for the borders of Europe, therefore we feel that we are defending international legality as well as Europe.”
(source: ana-mpa)