GRNews
GreekReporter.comGreek NewsArchaeologySkeleton of Worker From 550 BC Found in Greece

Skeleton of Worker From 550 BC Found in Greece 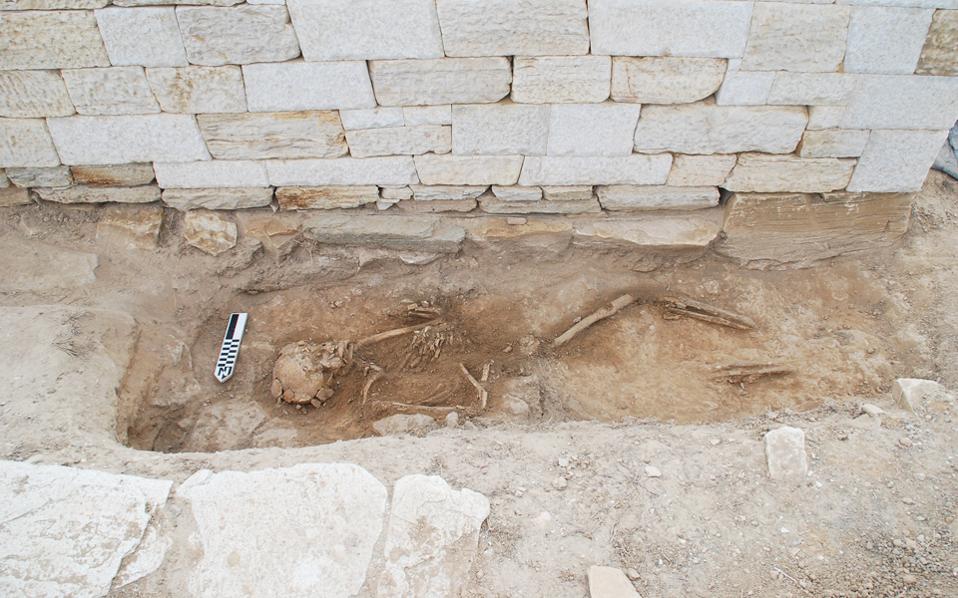 A human skeleton was found on the uninhabited island of Despotiko, that archaeologists believe is the remains of a worker circa 550 BC, says a Kathimerini newspaper report.
The skeleton was found during the restoration work on an ancient temple found on the Cyclades island, located close to Antiparos. The contracted position of the buried skeleton in the natural ground led archaeologists to assume that it is a worker who was working on the north temple wall.
“It is likely the skeleton of a worker, because he was buried without offerings. He seems to have died during work on the north wall in 550 BC and buried at that point,” said Yiannos Kouragios of the Cyclades Ephorate of Antiquities, who works at the site. The skeleton has been sent for anthropological examination.
Restoration work on the temple has been completed for this year. All eight pillars have been completed and two new thresholds have been put in the temple and the ritual restaurant, a pilaster is built and an intermediate wall for static purposes.
The Despotiko ancient sanctuary that is under restoration is the largest in the Cyclades after the one on Delos, another uninhabited island.
Regarding the pillars that were not found, Kouragios believes that, “Most of them were taken by the Venetians to build their castle on Antiparos.” It was often that Mediterranean peoples were raiding these islands in the Middle Ages, stealing pillars and marbles, he said.
According to scientists, Paros, Antiparos and Despotiko were one piece thousands of years ago.