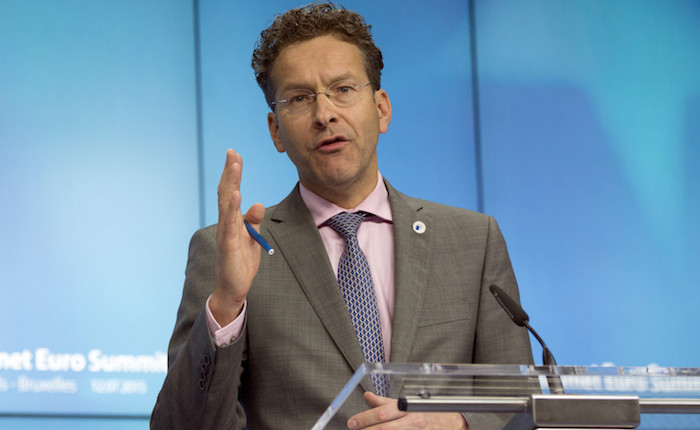 Measures concerning both the pension system and labor market reforms are expected to be the focus of talks during the second review of Greece’s programme, Eurogroup President Jeroen Dijsselbloem informed the Dutch lawmakers on Tuesday, in the customary document sent by the Dutch finance minister prior to each Eurogroup.
Dijsselbloem noted that the second review of Greece’s programme, which is now underway, will be on the agenda of the next Eurogroup on November 7. He said the Dutch government considers the rapid completion of this review important, while adding that it included a broad range of measures.
He said the institutions will brief Eurozone finance ministers on the details of these and noted a need for measures relating to privatizations, the financial sector, the energy market, public administration, medium-term and long-term budget strategy, the business climate, the market for products and education.
Dijsselbloem also announced that the official conclusion of the first review now opened the way for short-term debt relief measures for Greece, as announced by the May 24 Eurogroup meeting, which will be mainly focus on reducing interest rate vulnerability, including a “gentler” profile for European Financial Stability Fund (EFSF) loans and debt repayments in 2017. The institutions’ next mission to Athens has been scheduled for November 14-21, he said.
(Source: ANA-MPA)
Greek Labor Ministry: No more cuts to welfare payments
Greek Labor Minister George Katrougalos gave assurances that the social security issues had been settled during the first review program and would not open again in the second review. Emerging from a meeting held at the Greek Ministry of Finance, Katrougalos told reporters that there will be a “clean-up” of welfare benefits, stopping those that overlapped with the Social Solidarity Income, but added that there would not be cuts to special categories of welfare payments, such as those to the disabled or family benefits.
“What is happening now is to check the implementation of the law and the operation of the Single Social Insurance Agency,” he said.