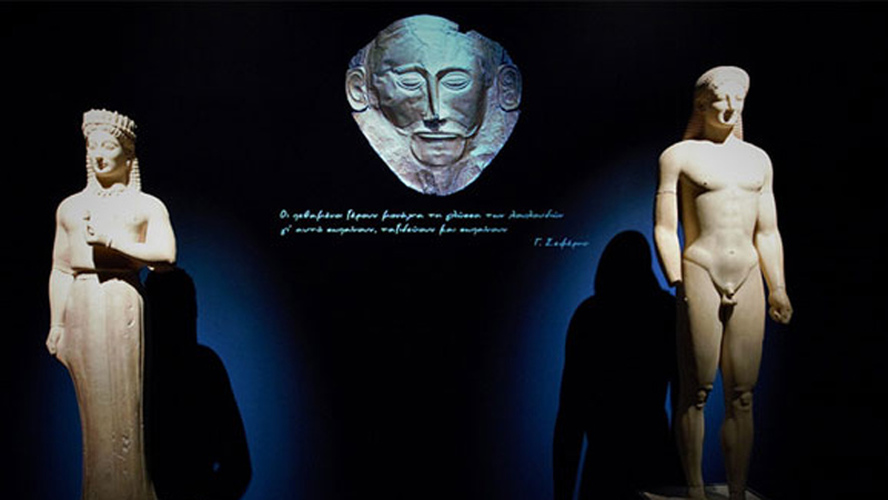 The National Archaeological Museum (NAM) celebrates its 150th anniversary on October 3, with a new temporary exhibition, titled “Odyssey.” In this way, the museum hopes to show its own Odyssey in becoming a cultural beacon for the world with the richest collection of artifacts from Greek antiquity. Its new exhibition plans to give visitors the unique opportunity to admire 184 artifacts from its own collection as well as six loans: three from the Epigraphical Museum of Athens and another three from the Acropolis Museum. Visitors will also see a few “surprises” in the display that details the adventures of people from the Neolithic Age to the Roman Era.
Apart from the value of the artifacts themselves, the beauty of the display is showcased as the marble is covered with the hues of the deep blue sea and sound effects, making the exhibition an all-encompassing experience. Add this to the moving words of Modern Greek poets such as C. P. Cavafy, George Seferis, Odysseus Elytis and Yiannis Ritsos and what you get is an emotionally-charged exhibition.
The narrative itself focuses on three thematic units:
(1) The journey offers evidence of man’s quest for raw materials, knowledge and ideas. Visitors enter a conceptual ship and travel through myths that accompanied the sea voyages of ancient people giving an allusive environment of adventure and knowledge.
(2) The concept of Ithaka, inspired by the homecoming (nostos) of Odysseys is devoted to the homelands of all people. These universal ideas and concepts are exemplified by works that embody the collective effort of societies to ensure development and prosperity as well as the urge of human existence to defy its perishability.
(3) The exodus is shown through ancient creations that symbolically demarcate great achievements that invite the modern visitor to pick up the torch and continue the creativity.
The music for the exhibition is courtesy of composer Vangelis Papathanassiou from his works “Ithaca” and “VOICES – Dream in an Οpen Place.” The Eugenides Foundation offered the equipment and the application of the starry sky that Odysseus was looking at on his return to Ithaca from the island of Kalypso, while the National Theatre provided the theatrical costume of “Oedipus the King.” Both of these offers contribute to the enhancement of the visitor’s experience in the relevant exhibition parts. The Stavros Niarchos Foundation offered a generous donation for the display.
The exhibition is accompanied by a catalogue in Greek and in English, a publication of the Archaeological Receipts Fund. This anniversary volume includes texts that present the diachronic trajectory and pursuit of the people who lived and created in the Helladic region and the wider catchment of the Eastern Mediterranean basin, as well as results of international research projects that are currently conducted focusing on important antiquities of the Museum collections, all this richly illustrated. The Afterword is devoted to the 150-year long history of the National Archaeological Museum enriched with texts on its scientific, educational and social contribution.
The opening of the exhibition has been scheduled for Monday, October 3, 2016, a particularly symbolic date, since it was on another Monday, 150 years ago, that the foundation stone of the first National Museum in the country was laid by King George I, in the presence of the entire group of ministers and the political, religious, military and municipal authorities.
The official opening is on Monday, October 3, in an invitation-only event. Greek President Prokopis Pavlopoulos will inaugurate the event in the presence of Culture Minister Aristidis Baltas. Actress Olia Lazaridou will recite Cavafy’s poem Ithaca.