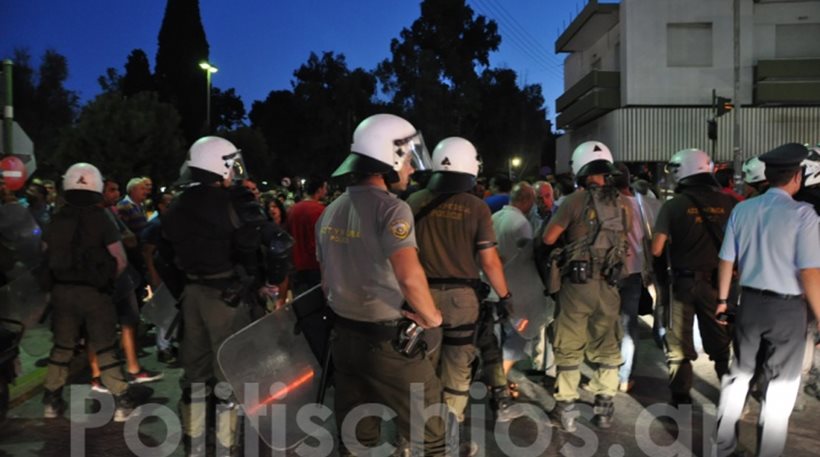 Greek police used tear gas against Chios residents during a protest march to the Suda migrant camp, causing a riot in the island’s capital central square.
Chios residents gathered at 6:30 pm at the capital’s main square to protest the overflowing migrant camps and the rising number of petty crimes committed by stranded migrants.
Initially, the demonstration was peaceful. Then protesters decided to hold a protest march towards the Souda camp where about 1,800 migrants and refugees are accommodated.
Momentarily there was unrest since the police had not been informed of the demonstrators’ intentions to march. Then riot police came to the scene, blocking protesters and pushing them toward another direction from the migrant camp.
Protesters attempted to break the riot police line to move toward the refugee camp. Some protesters were irritated by the presence of local reporters and attacked journalist Yiannis Stevias, broke his camera and hitting his hands. A group of protesters chased reporters who fled and hid in nearby stores.
Riot police used tear gas to contain the angry protesters and soon after things calmed down.
After that, a group of about 150 people marched peacefully to the Souda camp singing the national anthem and shouting slogans against migrants.
Initially, the migrants did not understand what was going on. When they did, they started shouting slogans asking to move to Athens and then out of Greece. Some of them threw rocks at the demonstrators from inside the camp, something that irritated them further.
The protesters called for another demonstration on Friday afternoon at the same square.