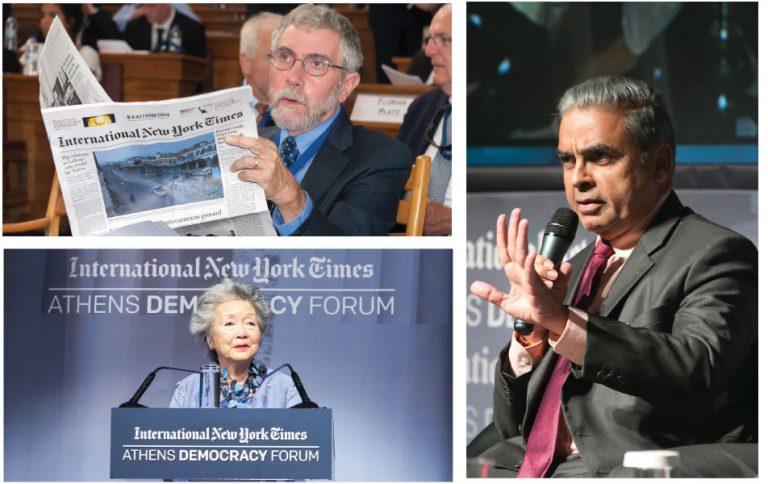 Is democracy good for business? Is liberal democracy compatible with religion? Should the major institutions of global governance be reformed, or scrapped? Do terrorist attacks justify giving greater powers to security forces? These and many more questions will be raised and discussed during the 4th Athens Democracy Forum, which will be held in the Greek capital on September 14-18.
The forum will bring together politicians, policy makers, journalists, scholars and experts from the fields of business, finance and technology to explore the challenges to liberal democracy and ways to face them. Staged among the Greek capital’s historic landmarks, it will tackle themes relating to religion, migration, power and money.
The Athens Democracy Forum will be hosted and moderated by New York Times editors, and is presented under the auspices of President Prokopis Pavlopoulos. It also has the endorsement of United Nations Secretary General Ban Ki-moon, who sent a letter of support.
“In too many places, democracy is in recession. Authoritarian rule has deepened. Civil society and media are coming under attack, with increasing restrictions across every continent. In some cases, calls for rights and freedom have produced the opposite result,” Ban says in his message.
“I thank all of you for using your creativity and influence as you discuss how to turn the democratic tide.”
Some of the keynote speakers include: Dimitris Avramopoulos, European Commissioner for Migration, Paul Krugman, Op-Ed columnist of the New York Times, Emmanuel Macron, French former Economy minister and President of En marche, Christiane Amanpour, Chief International Correspondent at CNN, Mario Monti, Economist and Former prime minister of Italy, Dr. Jennifer N. Riria, Group CEO of Kenya Women Holding Company, Geoffrey Robertson QC, Founder of Doughty Street Chambers, Giorgos Kaminis, Athens mayor, Olga Kefalogianni, New Democracy MP and former Tourism minister, Kenneth Roth, Executive Director of Human Rights Watch, Lucas Papademos, Vice President of the Academy of Athens and former prime minister, Edward Snowden, Former U.S. Intelligence Officer and whistleblower, and many more.
Source: ANA-MPA