The account of this journey through Athens was written by travel blogger Joanna Kalafatis from Lose the Map.
“Stop being a tourist – start becoming an explorer.” That’s the first sentence that greets you at the Greeking.me website, the tour company that promises to take you on a real local tour of Athens.
Athens is a strange city. It is both hated and loved. I spent the first 8 years of my life just 30 minutes from the city, and return every summer, but I had never explored as I should until recently. When I did, I fell in the “love” camp pretty hard. Athens doesn’t have the neat, chic beauty of Paris or the classic, rich neighborhoods of London. Though technically in Europe, it does not altogether have the feel of a European capital. Then again, Greece has always had a unique position on the continent, and a history influenced as much by its seat in the Balkans and proximity to the Middle East as its location on the continent.
But what Athens has, is what I love. It has a pulse. My heart truly belongs to the places where I find a sort of beautiful anarchy.
Greeking.me helps you find that beauty in Athens.
Discovering the History of Athens From the start, I was pretty impressed by my tour guides. Sofia was an archaeology ninja, and Anna and Nikos seemingly knew every cool fact, place, and event in the city. I would guess that even most Greek people would be surprised by the history I learned on the tour.
The building above, which is now the Parliament building, was the former home of King Otto of Bavaria, and Syntagma Square was his front yard. When a revolt occurred in 1843 , Otto gave over the Square to the people, and perhaps more importantly, also provided them with a constitution – known as “syntagma” in Greek.
The Parliament is now guarded by Presidential Guards, the famous Evzones. They wear traditional Greek military dress and do not, under any circumstances break their position or move from their post unless it is their time to change. Without giving too much of the tour away: Athens is one of the three oldest, continuously inhabited cities on the planet, as it has been called “home” by people since 3000 BC. Thanks to that status it bears the marks of many eras, from the ancient to the Byzantine to the modern. Some of the central alleys even have the original layout they did thousands of years ago. Feel free to walk down the cobblestone streets and imagine you’re right in the footsteps of Plato. It won’t actually make you smart, but you can walk and pretend.
If you get hopelessly lost in the winding central alleys, maybe it will also comfort you to know there is actually a reason for that: Greek cities were laid out this way to protect residents from pirates (not cool Jack Sparrow types, unfortunately). By the time the pirates figured out their way into the center, the residents – who knew the streets well – had time to flee and hide.
Syntagma – The Center Starting off in Syntagma Square, usually considered the center of the city, we walked by the above-mentioned Parliament Building. We also stopped to admire Grande Bretagne – one of the best hotels in the city, and definitely out of my price range.
Thanks to its location in front of Parliament, Syntagma Square hosts a LOT of demonstrations – Athenians do love to protest, especially with the current crisis – so be aware that it may get very crowded on some days, and perhaps a little rowdy, though there’s rarely anything to be worried about.
My tour guides led me out of the bustling center into some small side streets lined with old book shops and antique stores. Just a couple of blocks away from the epically noisy square, it felt like we were in another world, the crowds and traffic left far behind us. We stopped at Brettos, one of the area’s oldest distilleries, and further down stepped inside a charming shop to taste traditional Greek liquor – sweet and deceptively strong. Nikos knew the woman behind the counter, because this is Athens and everyone kind of knows each other. It’s comforting. Plaka – The Pretty Girl of Athens
We slowly made our way to Plaka, one of the most coveted residential areas in Athens, where you’re just as likely to find a great cafe around the corner as you are to find historic ruins alongside cobblestone streets. Plaka is one of the oldest neighborhoods of modern Athens and was home to pretty much the entire population of the city when King Otto ruled. At that time (1832), the population had dwindled down to about 5,000 people, but Athens was still chosen as the new nation’s capital after independence from Ottoman Rule for historic reasons. If you’re ever here, stop for a coffee at one of the many shops on Plaka’s steps, because 1) you’re in Greece now, so you’ll relax with a three-hour long coffee and like it, and 2) it’s damn beautiful. Although I am Greek, I never understood the process of “sipping” my drug of choice.

Anafiotika – A Greek Island in the City

Further on, we entered Anafiotika, a charmingly incongruous neighborhood in Athens that feels as though a Greek island was plopped right under the Acropolis. According to myGreeking.me tour guides, it started as an area to house the builders that came from the island of Anafi (every Greek island usually has something its known for – the best builders were supposedly from Anafi), and the houses have now been handed down through the generations to the builders’ descendants.

Also, kickass view of the city.

In Athens, you’ll find that the old and the new crash together constantly, and this is the case in Anafiotika. Just as you’ll find a trendy bar right under the millennia-old Acropolis, or an underground rock club a few steps from a centuries-old church, you’ll find beautiful street art all over the tiny alleys of one of Athens’ oldest neighborhoods. Also, cats. You’ll find cat after cat doing what cats do best: lying around and giving you smug, superior glances.
Acropolis & Other Ruins Now it was time for the crown jewel. I got a stunning view of the Acropolis, and explored the ruins below as well. The Acropolis has quite a few historic buildings surrounding it, like the Theater of Herod Atticus (Ηρὠδειο) below – which still hosts performances. The Theater of Herod Atticus. And a guy taking an iPad selfie.

What are the chances Madison Square Garden will be hosting concerts 2,000 years from now by Jay-Z and Beyonce’s super fly great great great great x10 grandchild?
None? That’s what I thought.
I also saw plenty of ruins I had never ventured past before, like Hadrian’s Library and the Roman Agora. As Sofia explained to me, there is perhaps no better example of the surprising diversity that has affected Athens’ past than the Roman Agora. In one space, you have Fethiye Mosque, the remnants of the Roman Agora, and ancient Greek buildings such as the Tower of the Winds, seen above, which functioned in part as a giant timepiece with sundials and a water clock. Yes, it would seem the ancient Greeks did invent almost everything.
Lastly, the agora is guarded by the Gate of Athena Archegetis, dedicated by the Athenians to their patron goddess. Monastiraki & the Markets
It was time to hit up Monastiraki, home to an enormous flea market and a very diverse crowd and history. Though the area is a big tourist hotspot, and the first few shops you’ll hit will inevitably be selling T-shirts with Greek flags and “Kiss me, I’m Greek” slogans, or whatever the hell cheap shit tourist shops sell, the further on you continue, the better stores you’ll find. A lot of Greeks get handmade sandals here as well, so stop into a shoe store and order a pair.
Pickpockets are pretty common in the area, so ladies, do what I do: jam your valuables into the pockets of your skinniest skinny jeans. Good luck to any thief trying to get that shit out unnoticed (I’m only partly kidding – but for real, just be aware). 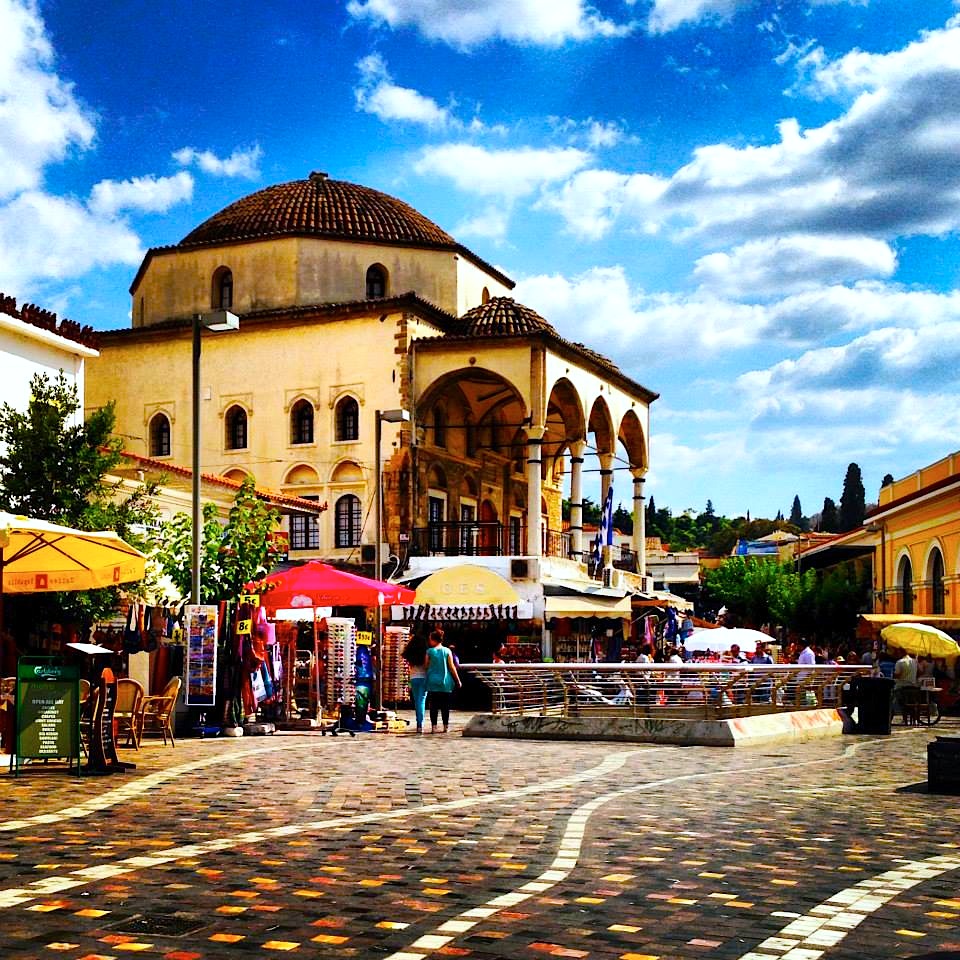 We emerged into Avyssinia Square, where people come to buy and sell antiques, and bargain hunt for literally anything you can think of. Even things that, as a reasonable person, you might believe you would have no use for, but you would be wrong, apparently. These things right here. You didn’t know you were missing this in your life until just now.

As we reached the final destination, the trendy, alternative neighborhood of Psirri, filled with street art, hipsters, and colorful coffee shops, I took a break and reflected on the whirlwind tour I had just taken. Through crises, earthquakes, and wars, the coffee shops in Athens will always be full.

I went through the Golden Age of Greece, Roman ruins, the palaces of Bavarian princes, century-old bazaars set up by refugees from Turkey, modern neighborhoods with graffiti, gourmet cafes and distilleries, populated by a simultaneously restless and relaxed youth.
Athens has been sculpted into something new. I know some tourists are disappointed because they come and expect to find Greek history preserved in amber, the streets untouched and the atmosphere unchanged. But Athens doesn’t serve that image; Athens is alive, constantly evolving, constantly transforming, caught between its modern identity and its long, diverse historic past.
I would highly recommend tagging along on an Athens tour with Greeking.me to discover these other faces of Athens. You’ll see the city in a whole new light and learn a lot – facts that will help you appreciate the complexity, life, and beauty of Athens.