TechNews
GreekReporter.com Greek News Culture 'Socrates Now': An Interactive Performance That Brings Us Up Against Ourselves

'Socrates Now': An Interactive Performance That Brings Us Up Against Ourselves 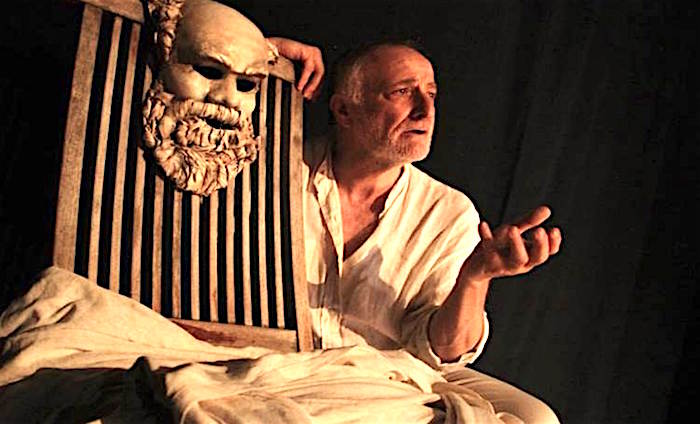 The Greek Theater of New York (EllinikoThεatro) and Visionary Culture present “Socrates Now,” an interactive performance that has traveled to 20 countries and has been staged at the world’s finest universities, such as Yale, Harvard, Oxford and Cambridge. The protagonist is Emmy award-winning Yannis Simonides who breathes life into Plato’s “Apology of Socrates,” a work that is as necessary as ever as it is an “apology” that brings us up against ourselves.
Why “Socrates Now”?
It was 2012 when we traveled for the needs of this presentation to countries that had invited us, such as Mexico, Russia, China, at a time when the crisis in Greece had just “exploded.” That’s when it dawned on us that we shouldn’t continue abroad, because Greece needed us. And it needs us… now!
We see a person who doesn’t take himself seriously… This puts each audience at ease, as it doesn’t give away the fact that they will view something heavy. In this way, we continue with Socratic questioning so that people can release the treasures they hide within themselves.
Is the innovation of “Socrates Now” based on interactivity?
Τhe innovation came from all the different and interesting audiences. At the beginning, it was just an ordinary discussion with questions and answers. Slowly, however, it developed into a dialogue with the public that, in many cases, ran for hours. Today, the discussion is as equally important as the presentation.
A presentation for everyone.
The performance is for everyone. We don’t choose our audiences. We have had some of the most sophisticated audiences all the way to those from the most neglected ghettos of the world. The work is based on humor and on a childlike curiosity that speaks to the hearts of all people regardless of their religion, beliefs, resources or education.
“In every era there are Socratic people, but we make them vanish.”
The crisis currently felt in Greece, and internationally, isn’t financial or political… but ethical. In this way, it brings us face-to-face with our own selves, as it seems that we have lost our souls. We, Greeks, were always the best and also the worst. Just like the gods we created. A bright example of this contradiction is Odysseus, who did the most extraordinary things, but also, just as he was leaving Troy, decided to destroy a beautiful island on his way just because he felt like it.
The situation has worsened globally, with money, power and consumer goods being the main priority. We need to seek a new ethical culture, by self-evaluating afresh and seeking anew the definition of virtue, patriotism, and civic duty. Just as Socrates did in his Apology in the hope that he would be judged objectively. In every era, there are Socratic people, but we make them vanish.
What are the three basic characteristics of the presentation?
The mask, with which I have a special relationship, which was an idea by our first director Lukas Skipitaris, and it was sculpted on my face by the renowned costume designer Theoni Vachlioti Aldredge. It inspires awe but also familiarity.
Humor and irony as a means of making the text more accessible to our audience and as a tool to portray characters in a theatrical and human manner.
Our translation, that came was a labor of love that lasted for 1.5 years, and is absolutely faithful to the text, but is also fully clear and accessible.
As a “modern Socrates”…
I belong to the Greeks who have lived away from their homeland for many years. In such cases, you may forget your country or more vividly feel that you were once there. I adore Greece and remain a Hellene to the bone. The wisdom of the notion that “I know nothing” occurs to me more and more as I grow older. I discover additional dimensions in subjects or situations that I thought I knew well. Finally, I feel that “Socrates Now” and the rest of our projects are the least that I can offer Greece. I can’t offer financial support or the kind of volunteer involvement that I would like, but I can make an offering through my work.
INFORMATION & TICKETS
Dates: June 25-July 24 (Wednesday-Sunday) at 9 p.m.
Venue:Courtyard of the History Museum of the University of Athens |5 Tholou Street, Plaka, Athens
Tickets: Adults €15 | Students and Groups €10
Book Now
Duration: 90 minutes, including discussion with the public
Tel.: +30 698 863 4787
Email: [email protected]
Plus info
On Tuesday, July 5 at 9 p.m., the American PBS television network is premiering Part III of the new National Geographic series THE GREEKS, which includes segments of the SOCRATES NOW performance beneath the Acropolis, along with on-camera commentary by Yannis Simonides on Socrates and on Athens then and now.