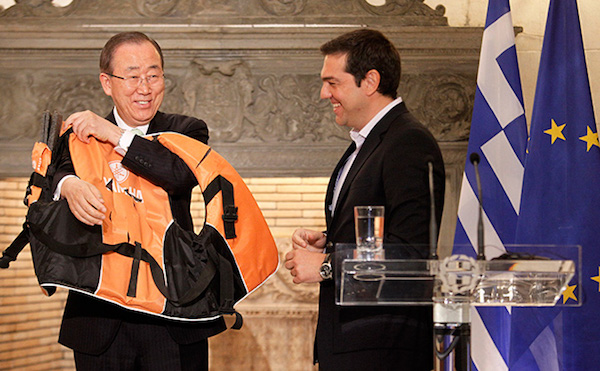 U.N. Secretary-General Ban Ki-moon came to Greece with a message of solidarity.
Reuters reported that after a meeting with Greece’s Prime Minister Alexis Tsipras on Friday, Ban Ki-moon told the press that “Greece should not be left alone to address this challenge on its own.”
Tsipras offered the Secretary-General a life jacket that was one of thousands that Greek authorities have recovered from the shores of several Greek islands in the past year.
While in Athens, Ban Ki-moon also visited the Athens Solidarity Center where he spoke to volunteers from various organizations, employees, refugees, as well as representatives of international organizations. He also spoke to the board of the NGO “Solidarity Now”, which financially coordinates and supports the center.
As he passionately spoke about the refugee crisis, he made it a point to say the crisis is an international issue, not just one of the Mediterranean. He pleaded with the international community to provide much needed humanitarian support for the refugee crisis in Greece. ANA-MPA reported that he said, “I can understand the challenges created as hundreds of thousands of people arrive every day…The numbers are large. However, this is not a crisis of numbers; it’s a crisis of solidarity.”
The Secretary-General also reached out to European and Asian countries to expand the legal routes for refugees. He stressed the importance of the refugees having ample opportunities to pursue an education, work opportunities and scholarships in the countries in which they are relocated. He also mentioned that the U.N.’s general meeting will discuss the refugee crisis in detail on September 19.
Ban Ki-moon also had a meeting with Greek President Prokopis Pavlopoulos earlier in the day. In the meeting he strongly urged the United Nations to apply more pressure on Turkey to implement the new migration deal put into action in March with the EU.
President Pavlopoulos was thankful for Ki-moon’s involvement in the refugee crisis that has effected hundred of thousands of migrants traveling through Greece and other Mediterranean countries in hopes to reach Western Europe.
“And let this be our common message today, ahead of World Refugee Day, which is on Monday, June 20,” Pavlopoulos added.
The U.N. leader will be traveling to the Greek island of Lesvos this Saturday, adding that he will then have the opportunity to see the situation in person.