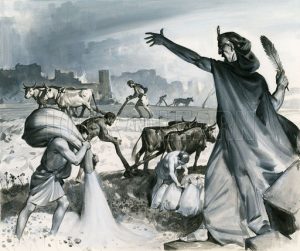 Historians claim that when Scipio sacked Carthage in 146 BC, he salted the earth to guarantee nothing would ever grow on Carthaginian soil. To further punish Hannibal’s mighty defense, Rome imposed impossible terms of war indemnity on those they had conquered. Hannibal’s greatness as a general failed his efforts at political and financial reforms. He ultimately fled into exile. Carthage was reduced to yet another Roman province.
Today, Scipio is the EU, controlling the salt that seasons the global economy: cash.  In one of history’s most tormented political reversals, Greece — defiant to its last breath and incapable of repaying €400 Billion in loans — capitulated to selling the country’s greatest assets. All in the futile hope of paying punitive austerity imposed by Teutonic conquerors. Condemning Greece to a future as a relatively poor, service-driven economy and semi-colonial EU protectorate. While Alexis Tsipras is no Hannibal and has yet to flee into political obscurity, that too is merely a matter of time.
Don’t believe it? The crown jewel of Greek assets, the very one that could have triggered the development and job creation necessary to attract vital foreign investment, was just sold in what amounts to the ultimate salting of Greece. The June 7 Memorandum of Understanding announced by Lamda Development of the Hellinikon Park secures nothing transformative or progressive will grow on these most valuable 1482-acres of Greece soil. That MOU, in part, states:

“The basic design includes the upgrading of the beach, residential developments, superregional and local commerce, hotel facilities and recreational areas, utilization of the Olympic facilities and the creation of new sports facilities, a new golf course, venues that highlight cultural heritage, educational facilities and research centers.”

Note how “educational facilities and research centers” are last in a laundry list of prospective development promises. Lamda built The Mall Athens in Maroussi, long considered an illegal and hideous blemish of strategic development.  Lamda Development Senior Management with their private equity, Titan Cement, and Ernst & Young pedigrees, are trained in the art of finance, not business. There is a difference. Finance is about securing profitable bottom lines. Today, successful businesses seek to create new markets. There is nothing innovative or revolutionary about Lamda’s plans. Fifteen years after being shuttered, the massive former Athens airport will be transformed into a playground for the rich, sold at fire sale pricing, creating short-term construction jobs and low-paying service jobs in the long-term. Not a new economy vision for the future of Greece. Or an optimistic landscape for the country’s massive and desperately unemployed. Yet, it is being heralded as a huge step forward. The EU is congratulating itself.

The economics of the future, the jobs of the future, are not service jobs. They are creative, technical, engineering jobs of the post-capitalist economy. Driven by automation, bytes not bits, the physics of fusion and renewable energy solutions. None of those sectors are included in Lamda’s plans. All the 2010-2014 talk about transforming Helliniko into a high-tech incubator for the Southern Mediterranean has been reduced to luxury shopping, entertainment and residential venues, with green public spaces added to the proposal for good (and much-needed) measure. Affirming Greece will remain a holidaymaker’s paradise. And little more.
Securing Greece’s place as one of the world’s great tourism destinations makes economic sense. It has long been Greece’s most resilient brand.  Tourism represents 20% of GDP and one in five jobs.  But they are mostly seasonal service jobs. If that is Greece’s destiny, let’s be honest about it. Let’s explain to the thousands of well-educated Millennials they’ll have to supplant their degrees in agribusiness, medicine, engineering or the social sciences into careers catering to the present tourism renaissance. Which is due in part to mounting instability in Egypt and Turkey. From Dubai to Berlin, friends tell me they’re visiting this year to “help out the poor Greeks.”  Sure, they’ll leave tourism monies, break a few plates and post breathless selfies at Nammos exclaiming, “This is the BEST Greek salad I’ve ever eaten! #MykonosIsTheRealGreece.” But by September, that shall end. It’s a finger in the proverbial dike.
Alexis Tsipras continues to enjoy vast popularity among the Greek electorate, political blunders and all. His populist promises speak to Greek’s deeply ingrained leftist sensibilities. Which no longer make any political or economic sense.   It is clear that the cronyism of Greece’s political and leadership class is more interested in easy concessions and profits than in engineering a modern economy through enlightened reform strategies. If they were, the future would include fewer hotels and restaurants and more 21st century enterprises. So Greeks must stop laying blame everywhere but with themselves. Lamda, after all, is a Greek company, run by Greeks.
Which only adds more salt to Greece’s wounds.